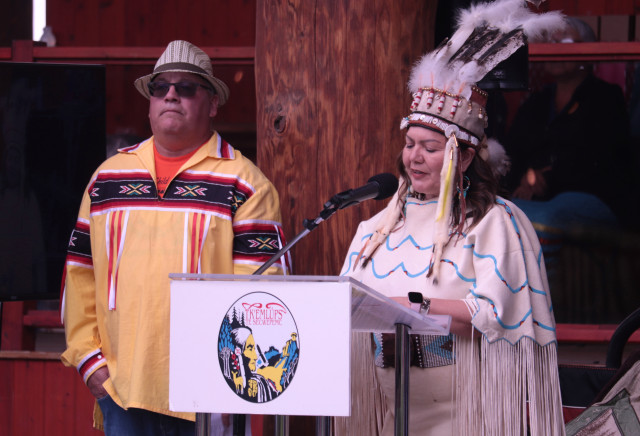 Casimir reflected on events of the past year since the band located over 200 probable graves near the former Kamloops Indian Residential School, honouring the survivors and intergenerational survivors that “carry those truths.”

“They did not relent. They had been through so many challenging and emotional, painful, re-traumatizing triggers this past year since the announcement. Far too many felt like it was like a wound being reopened. And that painful legacy of the residential school came flooding back,” Casimir said.

“That brings us today. For many, the truth is brought forward. And it is also an opportunity for all of us on that journey to healing.”

Monday’s all-day memorial event started with a sunrise ceremony at 5 a.m. and drew hundreds to the Tk'emlups Powwow Arbour to listen to speakers, dancing and drumming.

Casimir thanked the representatives for their attendance and their support.

“We have a respectful support from all levels of government, and we need to as we navigate these next steps and continue to educate the wider public about the true collective history. This truly is a shared journey,” Casimir said.

Casimir also acknowledged Joseph Nguyen, the head of the Roman Catholic Diocese of Kamloops, saying the band will continue navigating “meaningful steps forward” for the church.

Casimir said a year after the findings were announced, answers are still needed and further investigation required. She said the band will continue to use science to support next steps.

Casimir discussed her meeting with Pope Francis at the Vatican, saying she is disappointed the Holy See won’t be visiting Tk’emlups as she had requested, but she was “not disappointed” he would visit Canada.

“We cannot ignore the power of an apology. And that is why it is also significantly important and would be meaningful to truly be able to witness the pope deliver that on Canadian soil, here on Turtle Island,” Casimir said.

Simon, the first Indigenous Governor General in Canada’s history, addressed those gathered in the Pow Wow Arbour, saying she opened her heart to the survivors and intergenerational survivors in attendance.

“You knew what happened here. The atrocities, the deaths, the loss and the silence. So many children gone. So much possibility gone,” Simon said.

“It has been called a discovery — the discovery of unmarked graves of children cruelly ripped away from this life too soon. But it isn't a discovery so much as a confirmation of your experiences and knowledge passed down from generation to generation.”

Simon said she hoped Monday's memorial would contribute to the process of healing.

“Over the years, we as Indigenous peoples and we rediscovered our voice. But that doesn't mean people listened or understood. Today, we make ourselves heard across the country,” Simon said.

“Although it's hard. We're telling Canadians and the world about our wounds and pain, our anguish and outrage. And I know that so many have now heard us from every corner of the country.”

Memorial events will continue at the Pow Wow Arbour until 7 p.m. Monday.

Prime Minister Justin Trudeau will be attending the ceremony, meeting with Casimir and the band council before making himself available for a brief media availability.

Trudeau was last in Kamloops in October, a month after he chose not to attend a ceremony for the first National Day for Truth and Reconciliation.