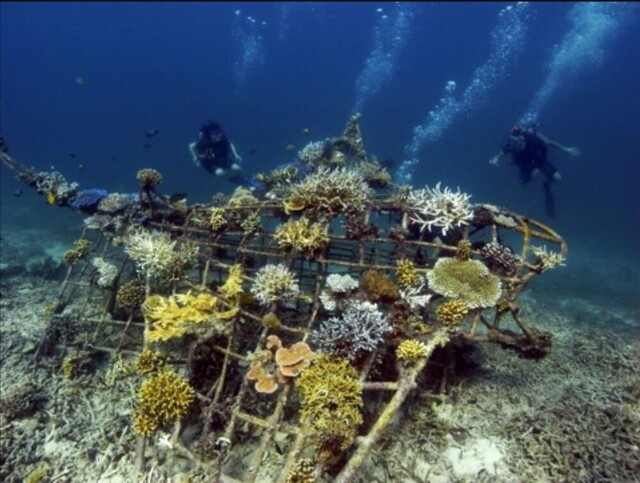 Photo: Marionpinta/Wikipedia
A biorock reef off the Indonesian island of Gili Tranwangan. Metro Vancouver is looking to trial the technology to foster sea life and protect shorelines from climate-driven erosion.

What do you get when you combine rebar, a low-voltage electric current and seawater?

Zaremba’s past work has led to the development of odour sensors in the region’s sewer network. Her team has also trialled hydrothermal liquefaction, a low-temperature, high-pressure process that takes wastewater sludge and turns it into a renewable, low-carbon fuel known as bio-crude.

This time, Zaremba is launching an experiment to test the viability of biorock in B.C. waters. By supplying a low voltage direct current into underwater metal trestles, the technology stimulates carbon dioxide and calcium found in seawater and transforms them into limestone-like deposits of calcium carbonate — the building block of corals and shells.

What emerges is a template for sea life and a barrier to lessen the destructive power of waves riding on storm surges and ever-higher tides.

As Zaremba put it, “The beach can grow back.”

A global solution tested in B.C.

Biorock technology goes back to the 1970s and was first conceived of by German inventor and marine scientist Wolf Hilbertz.

In the years since, over 500 installations have been rolled out across more than 40 countries, according to the non-profit Global Coral Reef Alliance.

Most of those can be found across the Indonesian archipelago, where more than 400 biorock structures have been dropped near devastated reef beds. Around islands like Gili Trawangan, a booming diving industry has grown alongside a series of mass bleaching events, which devastate coral and threaten the area's marine turtles and reef shark populations.

Today, over 30 biorock structures provide a template for life which can weather mass bleaching events with survival rates up to 50 times higher than coral reefs.

The technology works beyond tropical waters. In a heavily polluted saltmarsh of New York City, biorock has proven to boost the growth of oysters by a factor of nine, stabilizing the coastline and setting the stage for a rejuvenation of intertidal and marine life.

More recently, the southern port city of Busan revealed last month it has plans to use biorock — a “material that grows, heals itself, and becomes stronger with age” — to build a flood-proof, floating neighbourhood that can sustainably house 12,000 people off its shores.

But to date, no such attempts have been made in B.C.

Zaremba says biorock reefs can provide three big benefits. The first — creating crevices, nooks and crannies for plants, shellfish and sea creatures to make a home — has been the most exploited use to date.

In B.C. waters, imagine vast growths of kelp and seagrass, or juvenile salmon using the structures as refuges.

At the same time, the structures could be set up on top of submarine infrastructure, like pipelines for drinking water or sewers. They could armour a jetty, or be deployed on a tidal flat, where the structures would protect a beach from getting washed away.

In addition to stimulating habitat for marine life and attenuating the erosive forces of sea level rise, Zaremba says her research group will measure how the technology could sequester carbon.

“Similar to how the forests sequester carbon or store carbon, we could do that underwater as well,” she said of biorock and the life that could follow.

That means looking at the growth rate in B.C.’s waters, something that’s only been done on a giant piece of public art, says Zaremba.

At almost 13 feet high, the Time Top is a motif to the fantastic idea of a rapidly spinning vessel that can transport people through time and space. Today, its large bulbous body sits atop three legs perched on the intertidal shoals of False Creek.

Describing its “other-worldly” character, art curator Karen Love once suggested it sparked the curiosity and wonder of a child and inventor.

“Where did it come from? What is its function?” she wrote in an essay describing the work from late artist Jerry Pethick.

Fabricated from marine-grade bronze, the Time Top took inspiration from comic strips of the 1930s. Pethick died before it was created. But his posthumous instructions involved dropping the object off the coast of Gibsons where it remained submerged and charged with electrical currents for two years.

When it was pulled to the surface, a hard crust of accreted sea solids clung to its exterior. Biorock, proved the Time Top, could work in B.C.’s waters.

Paving the way to adapt B.C.'s coastline to climate change

To grow, biorock needs an electric charge roughly equivalent to less than a third put out by a regular car battery. The sweet spot for how long to leave the electricity flowing is usually around two years, the point where the artificial reef’s growth starts to slow, says Zaremba.

After that nature generally gets the head start it needs to flourish, she added.

Using a solar, wind or a tidal-generated power source could keep its carbon footprint even lower. More importantly, biorock would offset the need to produce concrete — a material that releases huge volumes of greenhouse gases into the atmosphere every year and is used to harden much of Metro Vancouver's coastline.

If it proves to work, Zaremba says biorock will likely first be rolled out at the Iona Wasterwater Plant in Richmond, B.C., three years from now.

At the end of a long jetty, treated wastewater currently flows out to sea amid piles of shoreline rock known as rip rap. But the artificial structure is not particularly helpful to sea life.

“We want to make sure that it actually does have potential before investing more in the installation,” she said. “We know that the material will accrete. We've seen that with the Time Top locally.”

“We think our pilot could pave the way for other municipalities, other jurisdictions along the coast here.”