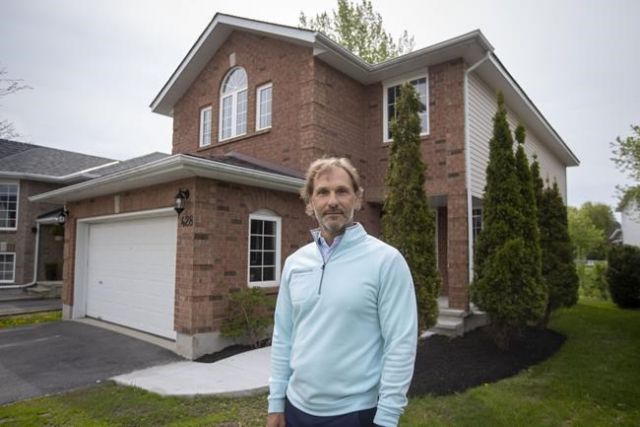 An email encouraging members of the Canadian Armed Forces to consider contacting Habitat for Humanity if they can’t find affordable housing is casting a spotlight on a growing challenge facing many military personnel and their families.

The email was sent by a senior officer at 19 Wing Comox to other members at the Royal Canadian Air Force base on northern Vancouver Island, which is home to the military’s search-and-rescue school as well as several squadrons of aircraft.

“Further to our discussion this morning, one potential housing option for our folks is Habitat for Humanity,” said the email dated May 5. “Should this be of interest to any of your personnel, please have them review the information located here.”

The email, confirmed as authentic by the Department of National Defence, included a link and contact information for the charity’s northern Vancouver Island chapter along with a list of criteria to apply for a home.

Defence Department spokeswoman Jessica Lamirande said members were not being directed to Habitat for Humanity, but rather that it was being presented as an option to those having “significant difficulty” finding housing.

“To the best of our knowledge,” she added, “this has not been an option presented or explored by CAF members in other regions of the country.”

But the email has highlighted growing complaints and concerns about the impact that skyrocketing home and rental prices are having on members of Canada’s Armed Forces – and Ottawa’s repeated failure to provide enough military housing.

Chief of the defence staff Gen. Wayne Eyre warned last month that his troops were feeling the bite of escalating housing prices and other costs of living as a result of their unique lifestyles, which include constant moves throughout their careers.

At the same time, Eyre lamented a shortage of military housing, saying: “Now we’re somewhere in the neighbourhood of 4,000 to 6,000 units short on our bases, which is also accentuating the housing problem.”

Online forums are rife with Armed Forces members discussing the current housing crunch, with some on the verge of moving desperate for advice on how to find affordable accommodation in markets where even rental prices are sky high.

While several Armed Forces members contacted by The Canadian Press declined to comment because they did not have permission to conduct an interview, realtors say they have seen firsthand the stress that many troops and their families are facing.

“The last couple years have been exceptionally, exceptionally tough for them,” said realtor Tracy Fogtmann, who works with military families relocating to the Comox area. “I've been in the business for 19 years and have never seen anything like this.”

The situation is similar in other military communities such as Kingston, Ont., where broker Luca Andolfatto has seen the stress many troops, their families and even their realtors are feeling.

“It's a lot of stress and a lot of pressure both on the personnel themselves and on the realtors,” said Andolfatto, who has worked with military families for 34 years. “Anyone who isn't ranked as an officer would find it a struggle.”

Jeff West is the executive director of Habitat for Humanity Vancouver Island North. He said the charity has had a long-standing working relationship with 19 Wing Comox, with Armed Forces members having previously volunteered to build local homes for those in need.

While he could not say exactly how the May 5 email came about, West suspected it had to do with a recent meeting the organization had with a senior officer.

“I think basically what happened is we went out and talked to him about what we’re up to, just maintaining contact, and this email came out of the leadership,” he said.

While unable to say for sure whether any of the 39 local Habitat for Humanity homes built since 2004 have gone to military members, West said he was not aware of any such arrangements to date.

But he acknowledged a “housing crisis” is affecting both military and non-military families in the area.

The Armed Forces has actually advised service members against buying a home, warning in March that some bases are located in “unpredictable and seemingly inflated housing markets,” and that a price correction was expected.

Meanwhile, the Canadian Mortgage and Housing Corporation reported in February that “rental affordability continues to pose a significant challenge across the country.”

Andolfatto can testify to that reality in Kingston.

“Some of our rents here I daresay are stronger than some of the rents you'd find in the GTA,” he said. “I'd say going to rent is just as problematic, and actually even more challenging.”

Many bases have military housing. But even as internal Defence Department assessments have repeatedly asserted since 2017 that at least 5,000 more units are needed to meet the military’s growing requirements, the number of homes owned by government has steadily decreased for years.

The Defence Department says the Canadian Forces Housing Agency has proposed a plan to build 1,300 new units over a 10-year period and consider “alternate delivery options” such as leases and public-private partnerships for the rest.

Four years after that plan was first raised, however, only 16 units are under construction and none have been finished.

Meanwhile, an internal review published in December warned that at current funding levels, the CFHA has not been able to properly maintain the 12,000 units now in its portfolio, with nearly one in five rated as “below average.”

Not all members of the Armed Forces are struggling, including those whose required moves resulted in them buying or selling at the right time or place, said Canadian Forces College professor Alan Okros.

The military also offers a number of benefits to help offset costs.

But Okros said there’s no denying some troops are having difficulty, and that the issue is emerging as an important factor in retaining personnel.

“The CAF is so short of people,” he said. “It becomes: ‘Do you really want to lose somebody by posting them from an inexpensive to an expensive city, which basically forces them to quit rather than take the move?’”

Back in Comox, Fogtmann continues trying to match incoming service members with new homes for themselves and their families.

"“But it's really stressful," she said. "My heart goes out to them.”