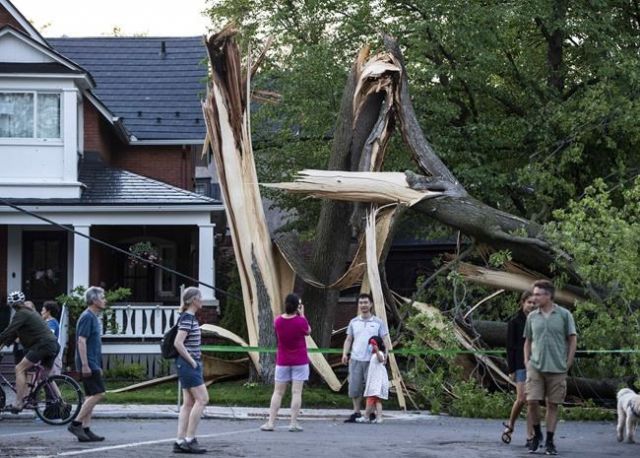 Tens of thousands of people remain without power after Saturday's powerful storm that left at least nine dead and caused extensive damage throughout southern Ontario and Quebec.

Hydro utilities reported Sunday that the damage to the power grid is extensive and complicated, meaning even as crews worked around the clock to make repairs, it could still be days before the outages are resolved.

Across the provincial border, Hydro-Québec had nearly 1,450 outages affecting more than 237,000 customers

The storm tore through southern Ontario and Quebec in a matter of hours, breaking hydro poles and toppling towers, uprooting trees, and ripping shingles and siding off houses.

The total death toll from Saturday's storm is still unclear, but police in Ontario reported seven people killed by falling trees in locations across the province during the storm Saturday, and an eighth killed by a falling tree branch in the storm's aftermath on Sunday.

A ninth person died Saturday when the boat she was in capsized on the Ottawa River near Masson-Angers, Que.

David Sills, executive director of the Northern Tornadoes Project at Western University, said wind speeds could have reached much higher than 132 kilometres an hour reported by Environment and Climate Change Canada, given the concentrated damage.

The widespread damage prompted the Ontario towns of Uxbridge, north of Toronto, and Clarence-Rockland, east of Ottawa, to declare states of emergency.

Sills said teams from the project have gone to the Uxbridge area as well as to southern Ottawa over suspicions that they could have been hit by tornadoes or elevated winds.