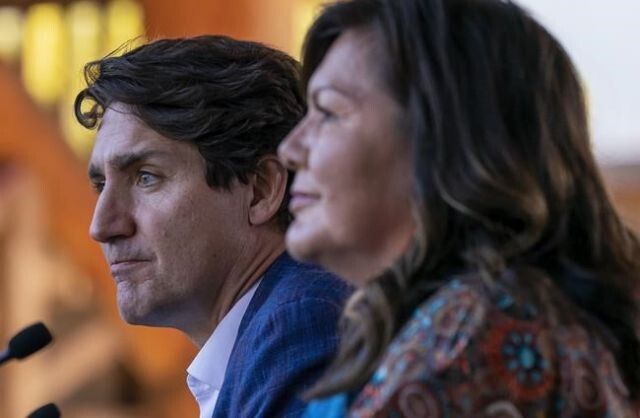 Photo: The Canadian Press
Tk'emlups Chief Rosanne Casimir sat next to Justin Trudeau on Oct. 18, 2021, as the two took questions from reporters on the Kamloopa Powwow Grounds.

A memorial to mark the one-year anniversary of the announcement of the detection of an unmarked burial site at the former residential school in Kamloops started with a ceremony at sunrise and will conclude with a closing evening prayer.

The memorial at the Tk'emlúps te Secwépemc powwow grounds near the former Kamloops school site will include cultural performances, dances, prayers and drumming and remarks from speakers.

Governor General Mary Simon will attend the memorial and deliver remarks to honour children who never returned home from the Kamloops school. Prime Minister Justin Trudeau is scheduled to attend the memorial in the evening, after meeting with Tk'emlúps te Secwépemc Kukpi7 Rosanne Casimir and council members.

Last May, Casimir said a war graves expert using ground-penetrating radar found what are believed to be the remains of up to 215 people buried at an unmarked site at the former school.

Kamloops school survivors say the past year was an emotional journey that included reawakened trauma, catharsis and, for some, closure.

Prime Minister Justin Trudeau will be in Kamloops on Monday, meeting with Tk’emlups leaders as part of the one-year memorial for Le Estcwicwey (The Missing).

According to the Prime Minister’s Office, Trudeau will attend meetings in Ottawa on Monday morning before flying to Kamloops to meet with Tk’emlups te Secwepemc Chief Rosanne Casimir and council.

A brief media availability is slated to follow the event.

Trudeau was last in Kamloops in October, about a month after he skipped out on an invitation from Casimir to attend a ceremony on the first National Day for Truth and Reconciliation. He travelled instead to Vancouver Island for a family vacation.

Tk’emlups is holding a day-long memorial on Monday, which gets underway at 5 a.m.

Last May, Casimir announced the discovery of more than 200 potential unmarked graves on the grounds of the former Kamloops Indian Residential School.