One in 10 Canadian women could have PTSD, says StatsCan 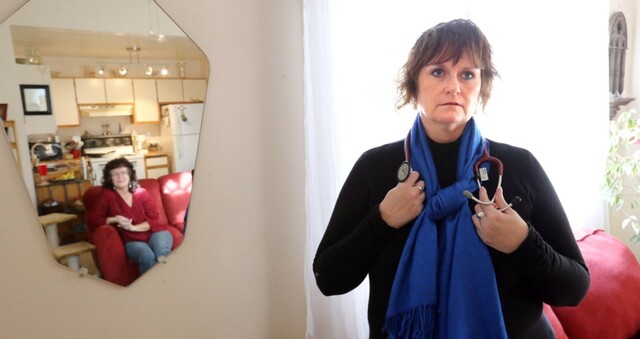 Photo: ADRIAN LAM
Lisa Jennings is a Victoria, B.C., paramedic struggling with post-traumatic stress disorder who has been unable to get her claim approved by WorkSafeBC.

Roughly eight per cent of adult Canadians have experienced symptoms that met the criteria for post-traumatic stress disorder (PTSD), says a new study from Statistics Canada.

Broken down by gender, 10 per cent of adult women and six per cent of men met the criteria for probable PTSD.

“Among Canadians who met the criteria for probable PTSD, sexual assault (14%) was the most commonly reported worst event they experienced,” wrote the StatsCan researchers.

PTSD is a disorder that develops in some people who have experienced a shocking, scary, or dangerous event, according to the U.S. National Institute of Mental Health (NIMH).

While such events don’t lead to debilitating symptoms in many people, a significant proportion can suffer unwanted thoughts or dreams of the traumatic experience. Strong physical reactions can lead to trouble breathing when people are reminded of the event. The disorder can also provoke strong negative emotions, such as anger, fear, guilt or shame.

Many lose interest in things they previously enjoyed.

“Some people recover within six months, while others have symptoms that last much longer,” notes the medical research centre. “In some people, the condition becomes chronic.”

To be considered PTSD, symptoms must last over a month and be severe enough to interfere with relationships or work.

According to the latest Statistics Canada study, overall, visible minorities did not make up a disproportionate share of Canadians who appeared to have symptoms of PTSD.

But that number climbed over 40 and 57 per cent for Black and Arab Canadians, something researchers said could be attributed to people in those groups facing traumatic events on a more regular basis.

Of those who met the criteria of PTSD, 10 per cent reported the worst event they experienced came from a life-threatening illness or injury. Six per cent said it came from either a situation involving a sudden accidental death or a physical assault.

With data for the study collected in the fall of 2021, the researchers said the COVID-19 pandemic has had “considerable impacts on people's lives” and “may have exacerbated existing symptoms.”

One in five Canadians who met the criteria of possible PTSD said the worst event of their lives happened in the past two years, and nine per cent said it was related to the pandemic.

“While symptoms of PTSD can develop immediately after the event, they can also develop weeks, months or even years later,” said the StatsCan report. “This means that the full extent of PTSD related to the pandemic may not yet be realized.”

Those surveyed reported the worst fallout from possible PTSD stemmed from impacts on their social and family life, as well as their ability to maintain close relationships. More than half of those who met the criteria of possible PTSD said trouble completing responsibilities at home and not able to attend work or school were among the worst impacts.

And in another worrying turn, in the year before the survey was done, 55 per cent of Canadians who met the criteria for probable PTSD had looked for professional help. But of those, 82 per cent said they had a hard time accessing the health-care services they needed.

Over a third said cost was a barrier to getting the help they needed.