Butchart Gardens, other Victoria tourism operators struggle to get employees 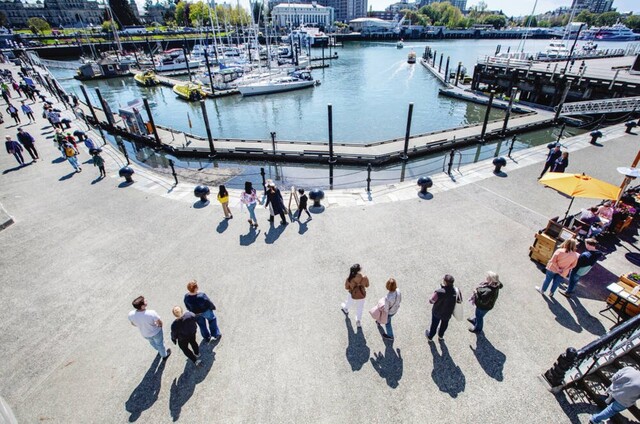 Dave Cowen is well aware Butchart Gardens will bear the heaviest load of tourists during a proposed eight-year shutdown of the Royal B.C. Museum starting in September.

But right now, the general manager of the gardens is struggling to keep pace with an influx of visitors already arriving at the gates eager to escape their pandemic bubbles.

Like many in the tourism industry, Butchart is having difficulty building back the staff it had to cut during the dark days of the COVID-19 shutdowns. And that’s no easy task as the world opens up again, cruise, air and ferry travel picks up, and the tourists pour in.

Visitor numbers to Greater VIctoria are expected to be close to pre-pandemic levels this year, and a full rebound is forecast in 2023.

But with a star attraction shutting down, it may mean another blow on tourism’s horizon.

Butchart is operating during the daytime only right now because of the staffing issues. It hopes to add evening hours Thursday to Sunday beginning June 1 and entertainment on weekends starting in July. Plans for Butchart’s famous fireworks displays are on hold.

“I can tell you we’re half of what our typical hiring target is … that’s [shortages] in the hundreds,” Cowen said Friday.

He said the province’s decision to close the museum this fall and build a $789-million facility by 2030 “is no doubt noble,” but the industry needs time to recover and rebuild after two years of the pandemic.

Victoria’s tourism industry always does well when attractions and services can operate “in clusters,” giving ­tourists several options on what to see and do, he said.

“Victoria has a lot of those,” said Cowen. But the loss of the Royal B.C. Museum for up to eight years will hurt because many other tourism businesses rely on the museum as the main draw. He’s hoping the plans “turn into a positive for as many people as possible … eight years is a long time.”

Meantime, Cowen hopes the federal and provincial governments can come together with solutions to address the lack of people to hire this year and possibly next. He said one of the main issues is the high cost of housing and increasing cost of living.

“We’re a small city and we’ve got university students who usually work at the garden who just can’t afford to stay here over the summer; they’re going back to their hometowns for the summer,” said Cowen. He said Butchart hopes more seniors — usually a integral part of its workforce — feel confident about returning amid the Omicron virus.

Reid James, manager of the Hotel Grand Pacific, a block away from the RBCM, said the province’s decision to tear down the museum “was completely out of left field” and the timing was odd because the decision will hurt the tourism industry as it claws out of COVID.

“In my opinion, I don’t know if it needed to be replaced. The cost seems extreme and the length of time is extreme, especially coming out of the pandemic,” said James. The museum is one of the top attractions for guests in the hotel, along with Butchart Gardens, said James.

“What else is there to do? They can walk the harbour. Buskers are there. There’s some galleries, whale watching, but the list gets shorter when you lose the museum,” said James. “We’re happy to send our guests to other places. There are wineries and the [Malahat] Skywalk, but farther out.”

James said the hotel industry has meetings planned for a response to the province’s plans.

At the moment, hotels are operating under capacity because of staffing shortages in all areas, chiefly housekeeping. The Hotel Grand Pacific has hit 80% occupancy — the most it can — on a couple of weekends since March spring break and will again for the Victoria Day long weekend.

The hotel is also hamstrung by increasing costs for food and other items like linens. Cramped supply chains are delaying essential items ranging from baby playpens for family guests to coffee creamers, said James.

Andrew Campeau, owner of Victoria Pedicab Company, said losing the museum for such a long period will be a blow. “We’re pretty tuned in” when it comes to the tourists and they do like the museum,” said Campeau. He said short-term visitors, in particular, like to visit the museum. “We’ve lost lots of good attractions over the years,” he said, noting the wax museum and Undersea Gardens. “We’ll just have to adapt around it.”

The museum attracts about 900,000 visitors a year. That’s a lot of tourism traffic, and it’s hoped that volume can be dispersed elsewhere. But few attractions have the Inner Harbour location or the museum’s capacity to handle large audiences.

Paul Nursey, chief executive of Destination Greater Victoria — which is pumping a record $2.2 million into promoting the region this year, said last week the museum has always been the heavyweight attraction when it comes to national and international companies booking tours of the city.

High-spending international travellers book visits though touring companies that rely on major attractions to flesh out itineraries, he said. Without the museum, Nursey said they will “lean on” reliables like Butchart Gardens, Craigdarroch Castle and the Art Gallery of Greater Victoria — as well as newer options such as Explore Songhees, the Malahat Skywalk and agri-tourism on the Saanich Peninsula.

The province said it will lay out its business case Wednesday on why it wants to tear down the museum complex and replace it.