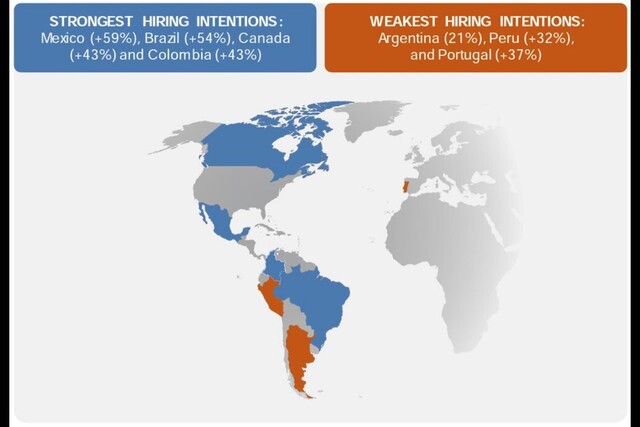 Photo: Contributed
Canada tied with Colombia for the fourth-strongest hiring outlook in the world for the summer of 2022

Canada is in the midst of a hiring boom as the number of companies looking to bring on new employees reaches its highest rate in a decade, according to a new survey.

The poll, carried out by the ManpowerGroup, found that among 40 countries surveyed, Canada had among the strongest prospects of hiring new people. Only employers in Mexico, Brazil and India were more confident they’d boost staffing levels over the summer.

Much of that confidence is driven by employers in British Columbia, which at 22 per cent, had the second strongest year-over-year improvements in hiring after Ontario.

Going into the summer, 39 per cent of B.C. employers said they would hire more people — again, second only to Ontario, according to a parallel poll focusing on Canada.

“This recovery is unlike any we have ever seen,” stated the Canadian report, released Friday.

Some industries are in demand more than others.

Fifteen per cent of Canadian organizations are having a lot of trouble finding skilled tech talent. And roughly half of employers in manufacturing, primary production, and technology or media expect strong demand for new talent.

“These survey results indicate a period of vigorous opportunity for job seekers.”

One worrying sign: the not-for-profit sector is not as confident, and has the only negative outlook on hiring new people over the summer.

The hiring prospects come as Canadians grow increasingly pessimistic about the economy.

Inflation has reached 6.8 per cent this week, a three-decade high in Canada. That — along with war in Europe — has driven up the cost of nearly everything.

“Russia's invasion of Ukraine in late February continued to affect energy, commodity and, most notably, food prices,” noted Statistics Canada in a May 18 report.

Statistics Canada said food prices were up 9.7 per cent in April 2022 compared to the same time a year earlier. The cost of pasta, for example, is up nearly 20 per cent, coffee 13.7 per cent, bread 12.2 per cent, and meat and fresh fruit roughly 10 per cent.

At the same time, said the StatsCan report, “In April, average hourly wages for employees rose 3.3% on a year-over-year basis, meaning that, on average, prices rose faster than wages, and Canadians experienced a decline in purchasing power.”

And as the Bank of Canada has indicated, higher interest rates loom; another survey by the Conference Board of Canada indicates consumer confidence decreased 11.7 points in May — the largest monthly drop since the pandemic’s onset.

With files from the Canadian Press