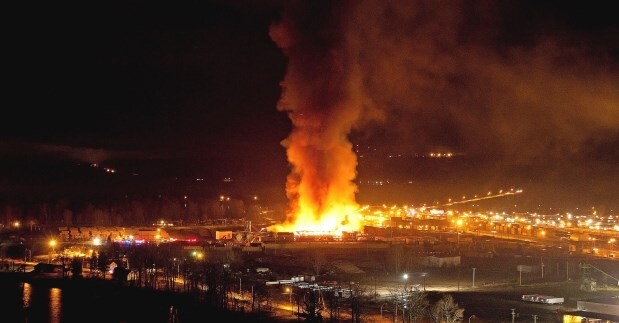 Action has been taken on most of a lawyer's suggestions for improving worker safety in the wake of the fatal explosions that struck two Central Interior sawmills slightly more than a decade ago, but some work is still to be done.

"WorkSafeBC is currently working to address the final two outstanding recommendations from the report, notably on how to strengthen a worker’s right to refuse unsafe work under the occupational health and safety regulation and secondly, on creating a designated worker ombudsperson position at WorkSafeBC," B.C. Labour Minister Harry Bains said in a statement to the Citizen.

In a matter of months, Babine Forest Products in Burns Lake and Lakeland Mills in Prince George were levelled in the blasts. Four workers were killed and 63 were injured over the course of the two incidents and officials at WorkSafeBC were sent scrambling to find answers.

Clouds of dust trapped inside the structures were found to have fuelled what were described as "deflagrations" or slower-motion explosions that travelled at less than the speed of sound but nonetheless blew the roofs off the sawmills and sent workers flying and, in several cases, left them severely burned and concussed.

Inquests into both events were held and two reports were commissioned with recommendations to prevent similar tragedies in the future.

Then, in April 2019, lawyer Lisa Helps was contracted to assess both government and WorkSafeBC's progress in implementing recommendations stemming from the past reports. By December 2019, Helps had produced a report featuring 11 recommendations.

On the remaining issue of worker’s right to refuse unsafe work, Helps said there appears to be a gap that allows an employer simply assign another worker to the task while not remedying the hazard.

"On balance, while there always needs to be a reasonableness assessment, this cannot be an excuse for an employer to put another worker in harm’s way," Helps said in her report.

As a possible solution, Helps suggested legislation that would require the employer to notify the replacement of the refusal by the previous worker and and given the option to continue, a documentation process for the refusal.

On the proposal for an ombudsperson, Helps said the workers she interviewed have never been properly informed about some of the significant steps taken by WorkSafe in response to the reports and inquest, leaving them "frustrated and concerned" that nothing has been done.

An ombudsperson would act as a liaison between WorkSafeBC and workers and "be able to assist in plain language."

"The explosions at the Lakeland and Babine Forest Products mills in 2012 were horrific incidents that should never have happened. Our workers deserve safe workplaces, and I’m determined to make this happen," Bains said.