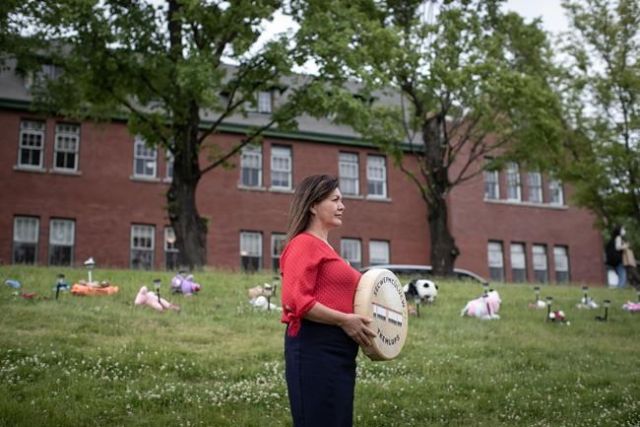 After a year of grieving since the detection of 215 suspected unmarked graves at the former Kamloops Indian Residential School, a new phase begins in the journey of the Tk'emlups te Secwepemc First Nation — bringing the missing children home.

The old apple orchard where evidence of the graves was found by ground-penetrating radar last May could soon be the site of an archeological dig and work to exhume remains, said Kukpi7 or Chief Rosanne Casimir.

"This is something that has not happened in the history here in Canada," she said at news conference on Wednesday. "There's no set of guidelines, no checklist."

To dig or not to dig has been one of the most fraught questions surrounding the issue of unmarked graves at residential schools. No consensus has emerged among survivors, with some seeing exhumation as a process that could help lay victims properly to rest, while others want them left undisturbed.

As for suggestions that the site needs to be treated as a crime scene, the RCMP say they opened a file on the case, but there is no ongoing investigation.

"We know that when we start doing some of the archeological work, we know that, one, when we do that it's going to be about communication," Casimir said.

Casimir pledged to keep nation members informed about progress and findings at the site.

She described the nation's approach to the site as an ongoing process of "exhumation to memorialization," which would involve finding evidence of remains and linking them to home communities.

"We are utilizing science to support each step as we move forward," she said.

"We do have a technical task force that has been put together that consists of various professors as well as technical archeologists and we are continuing to work with a ground-penetrating radar specialist as well."

The nation announced Thursday that ground-penetrating radar would be used again this week to search another section of the grounds surrounding the former residential school.

Kamloops school survivor Garry Gottfriedson said he struggled over whether the site should be dug up or left alone, but he leaned toward securing evidence to bring solace to himself, any buried children and the nation.

"If you can imagine something gnawing at your whole soul for your whole life, and then, finally, there's some peace of mind," he said. "That's how it is for me. This is one way in which part of that ugly history can be put to rest."

Gottfriedson, 69, said he attended the Kamloops residential school from kindergarten to Grade 3 between 1959 and 1963, where he witnessed abuse, but was largely protected by his older brothers at the school.

The internationally known poet said his eight other siblings, his mother and up to 30 aunts, uncles and cousins from his well-known Secwepemc Nation ranching and rodeo-riding family attended the school.

"All of us that were at that residential school already knew that they (bodies) were there," said Gottfriedson, who provides counsel and curriculum advice to Thompson Rivers University in Kamloops on Secwepemc Nation protocols and cultural practices.

"Now. it's sort of like saying, 'Do you believe us?' Exhuming those bodies and that sort of thing is one way to say, 'Now, if those were your 215 relatives put in a mass grave like that, tell me how you would get over it.'"

Percy Casper, a fellow Kamloops school survivor, said he wanted the burial site left undisturbed. Exhumation would only prove what has already been established by ground-penetrating radar, he said.

"The remains are there," he said. "What more proof do they want?"

Casper, 73, who spent 10 years at the Kamloops school, said he would rather see the former school building, which currently houses nation offices, torn down.

"I want that thing to come down so bad," said Casper, who is from the Cache Creek area Bonaparte Indian Band.

Prof. Geoff Bird, an anthropologist at the school of communication and culture at Victoria's Royal Roads University, said he already considered evidence of the unmarked graves to be "irrefutable."

But exhumation could represent part of a powerful process of recognition and reconciliation for the Tk'emlups te Secwepemc.

"It's the community and the families that ultimately decide whether they want to engage in this act of exhumation," said Bird, an expert on cultural memory and war heritage who worked previously as a heritage interpreter at the Canadian National Memorial at Vimy Ridge, France.

"If the idea is to ultimately memorialize those who are buried there, that is really a worthy goal," he said. "To spend this time to investigate in any way, shape or form is essentially an act of remembrance."

Casimir said the RCMP and B.C. Coroners Service were contacted shortly after the discovery last May, but she did not elaborate on contacts with the police.

The RCMP's E Division said in a statement it is not currently looking onto the site.

"While we did open an investigative file, we are not actively investigating," Staff Sgt. Janelle Shoihet said in a statement.

"The file was opened so that we can assist should our assistance be required. We respect that Tk’emlups te Secwepemc remains as the lead official at this time, and that the RCMP will continue to support."

A daylong cultural ceremony is set for Monday at the Tk’emlups te Secwepemc Pow Wow Arbor to mark the anniversary of the findings, said Casimir.

She said the discoveries at the site "shook me to the core".

A 4,000-page report in 2015 by the National Truth and Reconciliation Commission detailed harsh mistreatment at the schools, including emotional, physical and sexual abuse of children, and at least 4,100 deaths at the institutions.

The report cited records of at least 51 children dying at the Kamloops school between 1914 and 1963. Health officials in 1918 believed children at the school were not being adequately fed, leading to malnutrition, the report noted.

The Kamloops residential school operated between 1890 and 1969, when the federal government took over operations from the Catholic Church and operated it as a day school until it closed in 1978.