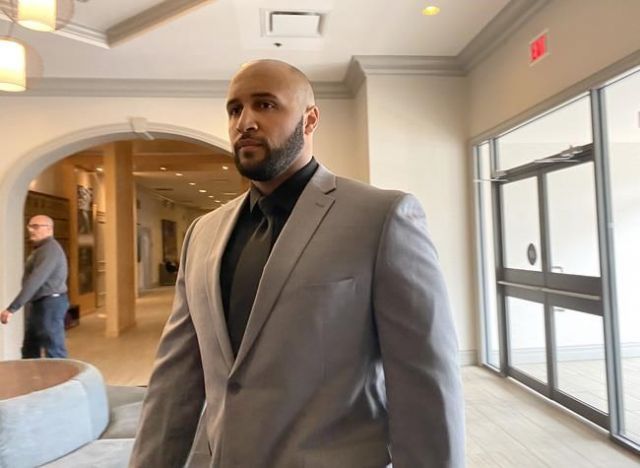 Photo: The Canadian Press
Const. Jeremy Son arrives at the coroner’s inquest into the death of Chantel Moore in Fredericton, Tuesday, May 17, 2022. An expert in Canadian policing says the New Brunswick police officer who fatally shot a 26-year-old Indigenous woman during a wellness check two years ago was following police training and practices.

An independent group should review the use-of-force policy that guides New Brunswick police to ensure it is concise and understood by all officers in the province, a coroner's jury recommended Thursday.

The three-woman, two-man jury was tasked with examining the death of Chantel Moore, a 26-year-old Indigenous woman shot dead by a police officer in northern New Brunswick in 2020 during a wellness check. Jurors ruled her death a homicide, following four days of testimony at the inquest that began Monday.

Earlier Thursday, Chris Butler, an expert in Canadian policing and the final witness at the inquiry, said the officer who shot Moore was following police training. Butler said Const. Jeremy Son had to use lethal force when Moore advanced toward him holding a knife.

Moore, Butler told the jury, was only five to seven feet away from Son on the balcony outside her apartment.

"Officer Son was imminently at risk of grievous harm or death at the point he started shooting," he said.

Moore was a member of the Tla-o-qui-aht First Nation in British Columbia and had moved to New Brunswick to be closer to family shortly before she was killed. Investigators with Quebec's police watchdog, the Bureau des enquêtes indépendantes, concluded last year that the shooting occurred after Moore approached the officer with a knife in her hand.

Jonathan Brunet, a former boyfriend of Moore, told the inquiry earlier this week that he called police at 2:06 a.m. on June 4, 2020, to request a wellness check after he received text messages that he thought were written by someone stalking Moore.

Son arrived on the third-floor balcony outside Moore's apartment at 2:32 a.m. and saw her sleeping on a couch inside. He knocked on the window and shone a flashlight on himself to show he was in full police uniform.

Son told the inquest that Moore appeared to pick up something metallic on her way to the door. He testified that when she emerged outside, she had a knife in her hand pointing upward and an angry look on her face. Son said Moore did not respond to his demands to drop the knife and that he shot her four times in rapid succession.

"Const. Son's use of lethal force in this situation was consistent with police training and practice," Butler said. He said Son left himself with no exit by backing up on the balcony, but he said it would only be speculation to suggest the outcome would have been different had the officer instead been standing on the stairs.

Butler said that the ballistics vest Son was wearing could be easily pierced by knives.

Son told the inquest that he demanded in French that Moore drop the knife. Butler said that with such limited time and without knowing whether Moore was bilingual, the officer should have issued his demand in French and in English, or yelled, "Police! Stop!"

Police officers who testified earlier in the week said efforts to stop the bleeding from Moore's wounds ended when a pulse couldn't be found. Butler, meanwhile, said efforts to provide medical aid should have continued until paramedics arrived.

Former Edmundston police chief Alain Lang told the inquest Wednesday that his police force only had one working Taser on the night Moore was shot. He said the force now has five, adding that while all officers have been trained in their use, it is not mandatory that they carry Tasers.

Butler said it was "indefensible" that the force trained officers on how to use Tasers but didn't have a policy requiring they carry them. However, he noted that conductive-energy weapons such as Tasers are not 100 per cent reliable and are often not effective if a probe misses or the target is wearing heavy clothing.

He said Son only had time to use his gun.

The jury recommended that police officers in the province be tested on their comprehension of current police force policies and procedures. Jurors also recommended police take actions to build better relationships with First Nation communities.

Martha Martin, Moore's mother, said it has been a difficult week for her. "You hear all the details leading up to the death of your child," she said about the inquest. "You hear the details to when their very last breath was taken."

The six chiefs of the Wolastoqey Nation in New Brunswick issued a statement Thursday saying the inquest demonstrated the urgent need for an Indigenous-led inquiry into systemic racism. They say the jury's findings and recommendations do not address the serious nature of the tragedy or the systemic issues embedded in the justice system.