Power back on to areas of Peachland, Summerland 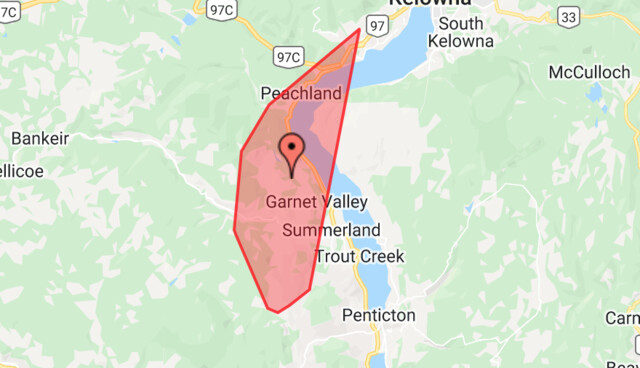 Photo: BC Hydro
Power was out to areas of West Kelowna, Peachland and Summerland, but was restored Wednesday night before 9:30 p.m.

The lights are now back on.

The BC Hydro website shows the power has been restored to the affected areas of Peachland and Summerland.

Power has been restored to affected areas in West Kelowna.

BC Hydro says about 660 customers in Peachland and Summerland remain without electricity.

Strong winds are likely to blame for a power outage affecting nearly 3,000 customers in parts of West Kelowna, Peachland and Summerland.

One woman in Peachland called Castanet to say the lights were out in an area around Princeton Avenue and Ponderosa Drive. The Peachland Pharmacy on Beach Avenue posted on Facebook to let customers know staff are still working but the phones and computers are down.

According to B.C. Hydro, the outage began around 3:40 p.m. and was caused by a tree coming down across a line. The affected area is north of 97 HWY, South of Elliott Road, West of HWY 97, and east of Princeton Avenue. A total of 2,685 customers are without electricity.

B.C. Hydro is also reporting outages along the Okanagan Connector corridor due to trees across the line. One affects about 150 customers near Aspen Grove.