High winds topple trees and knock out power to thousands in southern B.C. 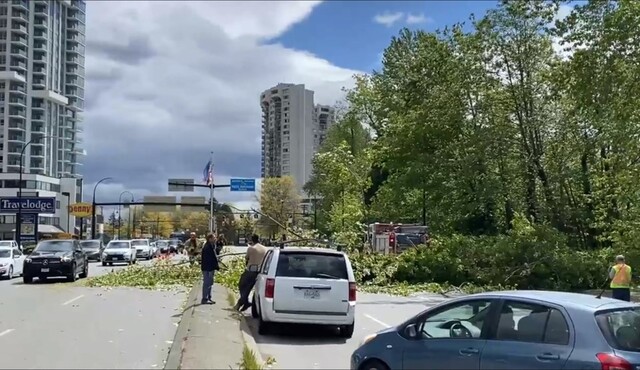 Photo: Maria Lavas
Drivers came to a halt on Marine Drive on the North Vancouver/West Vancouver border, May 18, 2022, while crews clean up a massive cottonwood tree, blocking five lanes of traffic.

More than 40,000 homes and businesses were without power Wednesday as strong winds ripped across Vancouver Island.

The scheduled arrival of a cruise ship at Ogden Point Wednesday evening was cancelled after the captain of the Norwegian Sun told the Greater Victoria Harbour Authority it was not safe to dock.

“It’s very rough out there,” said harbour authority spokesman Brian Cant, noting there were even whitecaps in the Inner Harbour.

The City of Nanaimo took the extraordinary step of closing all city parks just after noon on Wednesday due to high winds. The city reported several downed trees on city streets and in parks and warned residents to stay away from treed areas.

Nanaimo’s Aquatic Centre was also closed after losing power, while detours due to fallen trees were causing delays throughout the city.

And it could get worse, as the wind is expected to intensify through the day and evening hours, according to Environment Canada.

On the South Island, thousands of customers were without power, including on the West Shore, Saanich and the Peninsula, as well as Duncan/North Cowichan, Salt Spring Island, Pender Island and Saturna Island.

Thousands more customers were affected on the North Island and major outages were reported in the Comox Valley, Ladysmith and Nanaimo areas, according to B.C. Hydro.

B.C. Ferries cancelled the 10:50 a.m. and 11:25 a.m. sailings between Crofton and Salt Spring Island because of the high winds and rough sea conditions. A sailing from Pender Island to Swartz Bay was also cancelled after the Queen of Cumberland had difficulty docking.

Heavy winds are also having an impact in the Lower Mainland.

“About five cars up from me, I see this huge cottonwood tree just crashing down towards the road, and that it did,” she said, still somewhat in disbelief. "It was one of those moments where time slows down and it seemed like it was falling in slow motion, and you put on your brakes because you want to be safe and you hope nobody gets hurt.”