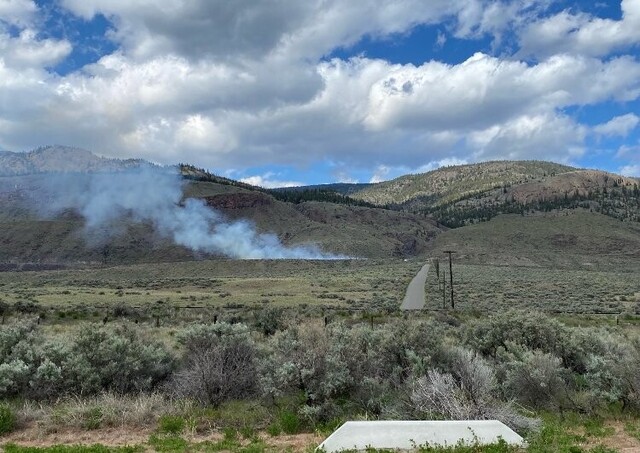 Photo: BC Wildfire Service
This photo shows a wildfire near Juniper Beach, between Savona and Cache Creek, on Tuesday evening.

Ashcroft RCMP is asking drivers to check their dash cameras as they look into the cause of the Juniper Knoll fire.

Police are requesting that anyone with dashcam footage who was driving on Highway 1 between Walhachin and Cache Creek on May 17th, between 3 p.m. and 4:30 p.m., provide that footage to investigators.

“The exact cause of the fire is yet to be determined,” says Corporal Lloyd Pinsent, Ashcroft RCMP. “We need to speak with anyone who was driving in the area that has dashcam footage to help further the investigation.”

You can contact Ashcroft RCMP at 250-453-2216 if you have footage or any other information about the incident, or report tips anonymously through Crime Stoppers at 1-800-222-TIPS (8477) or at www.bccrimestoppers.com.

Investigators are working to determine the cause of a small wildfire sparked Tuesday in the Juniper Beach area between Savona and Cache Creek.

The blaze, estimated at three hectares as of Wednesday morning, is now considered under control.

BC Wildfire Service fire information officer Karley Desrosiers said investigators are on scene, but not firefighters.

“We have fire origin and cause [investigators] on scene but no requirement for crews,” she said, noting the blaze is suspected to have been caused by human activity.

Desrosiers said the investigators are working to pinpoint where the blaze started, then determine what exactly caused it.

“They go out there and look at the site of ignition, potentially what could have caused this fire and isolate the spot where it could have started, and then they write up their report,” she said.

The fire covered an estimated five hectares on Tuesday evening.