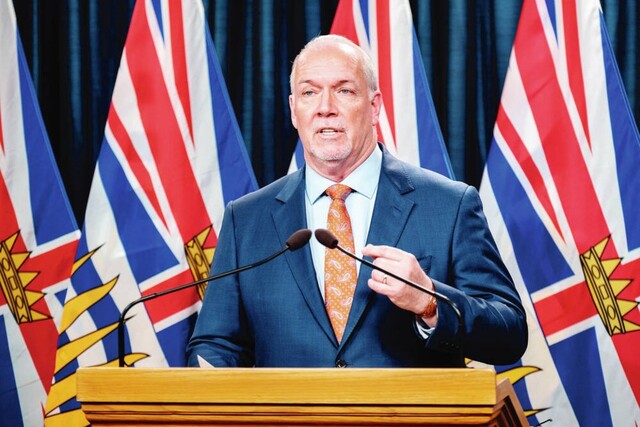 Premier John Horgan says the number of people without a family doctor in B.C. is a problem and committed Tuesday to work with family doctors on a clear process and firm timelines for improvements.

“While this is a problem across Canada, it is very acute here in B.C. I’ve heard from physicians throughout the province that they are both overworked and frustrated by the pressures they are under, which are compounded by the ongoing consequences of the pandemic,” said Horgan.

The statement comes amid contract negotiations with doctors and ahead of a patient-driven B.C. Healthcare Matters rally Thursday outside the legislature, 11 a.m. to 1 p.m.

Horgan said he and Health Minister Adrian Dix had a “constructive discussion” with Doctors of B.C. on Tuesday.

About 900,000 British Columbians are without a family doctor, including about 100,000 on the south Island.

The government has committed to working with Doctors of B.C. on “a clear process with firm timelines in order to make tangible progress on this complex problem,” Horgan said.

In 2010, the then-governing B.C. Liberals promised everyone a family doctor who wanted one and in 2013 funded the GP for Me initiative, which it abandoned in 2016 to focus on the more attainable goal of attaching patients to team-based care clinics.

At that time, Horgan criticized the Liberals for being “nowhere near” their goal. The government could have built team-based care models faster, better recognized credentials of foreign doctors and boosted medical-school numbers, he said.

“Not everyone needs to see a GP. I get that, but if that’s the case, why did [the Liberals] make the promise in the first place?” Horgan said.

Doctors have been asking the province for more options for how they’re paid, in addition to fee-for-service, such as salary or contracts, enhanced fee-for-service that recognizes the actual time doctors need to spend with patients, financial assistance with overhead costs, provision of more allied health professionals including nurses to assist physician-led team-based care, more training spaces for physicians, and an improved accreditation process for foreign-trained doctors.

About 30 physicians calling themselves Family Doctors for Better Patient Care in B.C. has prepared a leaflet titled “Commonsense Solutions to a Crisis in British Columbia” to give MLAs and people attending Thursday’s rally.

The leaflet notes B.C. has about 6,800 trained family doctors yet only about 3,500 are practising in that role, according to the General Service Practice Committee’s 2020-21 year-in-review. It blames the province for “starving” family doctors from appropriate levels of funding and causing “an exodus” from the profession.

The doctors advise the province to: employ the same data-driven, evidenced-based, urgent action used during the pandemic to address doctors’ needs; establish pay equity between family doctors and higher-paid specialists; and provide incentives for hundreds of doctors in specialties to return to family medicine.