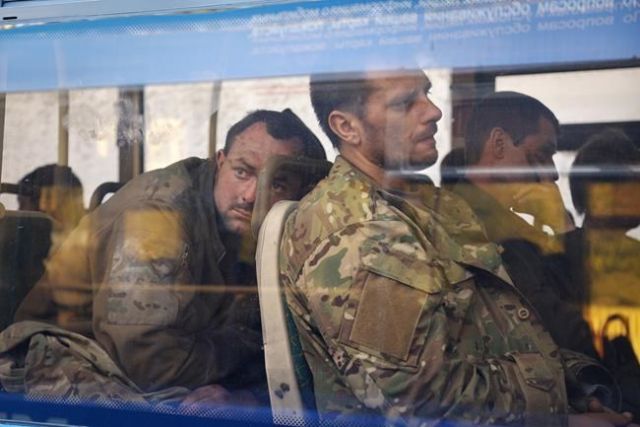 Photo: The Canadian Press
Ukrainian servicemen sit in a bus after they were evacuated from the besieged Mariupol's Azovstal steel plant,.

Russia said Wednesday that nearly 1,000 Ukrainian troops making their last stand in Mariupol have surrendered, edging ever closer to the end of the battle that turned the city into a symbol of resistance and suffering.

The fighters trooping out of the ruins of the sprawling Azovstal steel mill, carrying their wounded with them and leaving a dwindling number still inside the plant, face an uncertain fate. Ukraine says it hopes for a prisoner swap but Russia has said at least some could be investigated for war crimes.

Russia called the slow but steady abandonment of the last redoubt of resistance a surrender, but Ukraine avoided that word. It’s unclear how many fighters remain inside plant’s warren of tunnels and bunkers, where 2,000 were believed to be holed up at one point. Also unclear is the status of the garrison’s commanding officers.

Both sides are trying to shape the narrative and extract propaganda victories from what has been one of the most important battles of the war.

“There can be just one interpretation: The troops holed up at Azovstal are laying down their weapons and surrendering,” Kremlin spokesman Dmitry Peskov said Wednesday.

Meanwhile, a Russian soldier facing the first war crimes trial since the start of the war pleaded guilty Wednesday to killing a Ukrainian civilian. Russian Sgt. Vadim Shyshimarin, 21, is accused of shooting a Ukrainian man in the head in the early says of the invasion. He faces up to life in prison.

Ministry video has shown troops carrying out their wounded on gurneys and submitting to firm and thorough pat-downs. The troops were unarmed but were not shown with their hands raised in the air.

Only the plant stands in the way of Russia’s ability to declare the full capture of Mariupol — a development that would be a boost for Russian President Vladimir Putin in a war where many of his plans have gone awry.

After failing to overrun Kyiv in the early days of the war, Putin switched his focus to eastern Ukraine's industrial heartland of the Donbas, but his troops are now bogged down there. He has faced a further setback with Sweden and Finland deciding to join NATO.

The countries submitted their applications Wednesday, a move welcomed by NATO Secretary-General Jens Stoltenberg. The 30 member countries will now consider the requests. Finland and Sweden could become members within months if Turkish President Recep Tayyip Erdogan's reservations can be overcome. Other NATO countries want to move quickly.

Mariupol's defenders grimly clung to the steel mill for months and against the odds, preventing Russia from completing its occupation of the city and its port. Its full capture would give Russia an unbroken land bridge to the Crimean Peninsula, which it seized from Ukraine in 2014.

The steel plant's fall also would remove a distraction for Russian military planners who are focusing what remains of their invasion force's strength on battles elsewhere in the east and south of Ukraine.

At least some of the Azovstal fighters who laid down their arms have been taken to a former penal colony in territory controlled by Russian-backed separatists. Their legal status is not clear.

The Associated Press filmed military vehicles bearing the pro-Kremlin “Z” sign escorting a convoy of buses carrying the troops, as Soviet flags fluttered from poles along the road. About two dozen Ukrainian fighters were seen in one of the buses.

Ukraine says it hopes they can be exchanged for Russian prisoners of war and that negotiations are delicate and time-consuming.

Ukrainian President Volodymyr Zelenskyy said “the most influential international mediators are involved” in the evacuation.

But Russia’s main federal investigative body said it intends to interrogate the troops to “identify the nationalists” and determine whether they were involved in crimes against civilians. Also, Russia’s top prosecutor asked the country’s Supreme Court to designate Ukraine’s Azov Regiment — among the troops that made up the Azovstal garrison — as a terrorist organization. The regiment has roots in the far right.

The Russian parliament planned to take up a resolution Wednesday to prevent the exchange of Azov Regiment fighters, Russian news agencies said.

Mariupol was targeted by Russia from the outset of the invasion. The city was largely flattened in steady bombardments, and Ukraine says over 20,000 civilians have been killed there. During the siege, Russian forces also launched lethal airstrikes on a maternity hospital and a theater where civilians had taken shelter. Close to 600 people may have been killed at the theater.

Ukraine’s human rights ombudsman said the Russian military was also holding more than 3,000 civilians from Mariupol at another former penal colony. Ombudsman Lyudmyla Denisova said most civilians are held for a month, but those considered “particularly unreliable,” including former soldiers and police, are held for two months. The detainees include about 30 volunteers who delivered humanitarian supplies to Mariupol while it was under siege, she said.