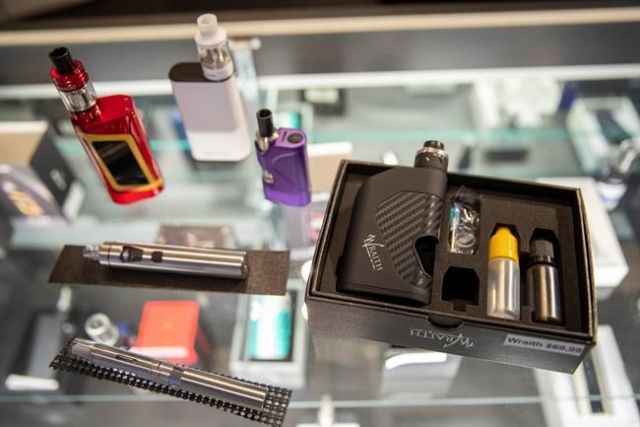 Photo: The Canadian Press
Vaping devices are displayed at a store in New York, Thursday, Jan. 2, 2020. The Canadian government is in the midst of reviewing the legislation that legalized vaping for the first time since it was passed in 2018, and appears to be veering away from the narrow path between treating vapes as a harm reduction tool and danger in and of itself. THE CANADIAN PRESS/AP-Mary Altaffer

In the eight years or so since he opened his first vape shop in Ottawa, Ron Couchman said a great sense of community has been lost.

A former cigarette smoker himself, Couchman said he remembers when his store operated almost as a support group for people trying to find a healthier alternative to cigarette addiction.

“We could teach other people how to vape when people were struggling to get off cigarettes, we'd play board games and have movie nights,” Couchman said.

As provincial and federal legislation started to clamp down on those activities, he said the camaraderie has faded.

Couchman is a passionate advocate for the potential of vaping to help people leave more harmful tobacco habits behind. At one point the federal government appeared to be onside with that, he said, but that seems to be changing.

“The last few bouts of legislation (have) really swung the other way to the point that it's serving as a disincentive to quit smoking,” he said.

The government is in the midst of its first review of the 2018 legislation that legalized vaping, and appears to be veering away from the narrow path between treating vapes as a harm reduction tool, or a danger in and of themselves.

The harms of vaping relative to smoking tobacco cigarettes are still something of a mystery, but the government’s website suggests it’s safer than inhaling cigarette smoke.

Advocates on both sides of the issue say regulations have become tougher on vapes and have more or less abandoned the product as an alternative to cigarettes, leaving them to wonder how the government plans to deal with cigarette smoking in Canada.

“They bet heavily on harm reduction as a way to address tobacco. It hasn't worked for them, and they didn't have a more comprehensive plan,” said Cynthia Callard, executive director of Physicians for a Smoke-Free Canada.

Health Canada’s goal is to reduce the number of people who smoke tobacco to just five per cent by 2035, from about 14.8 per cent in 2019.

An audit of the department shows tobacco smoke is declining in popularity, but mainly because young people aren’t picking up the habit and existing smokers are dying.

Tobacco use is still the leading cause of preventable death and disease in Canada, with approximately 48,000 people dying from smoking-related illnesses every year, the government says.

Vaping remains relatively unpopular for adults over the age of 25, with just three per cent reporting that they vaped within the last month in 2020, according to the results of the Canadian Tobacco and Nicotine Survey. That’s about the same it was in the 2017 Canadian Tobacco Alcohol and Drugs Survey.

In response, the government clamped down on vaping with a range of regulations, banning promotion and advertising of the products in certain spaces and putting limits on the amount of nicotine that can be in them. It's also expected to restrict which flavours can be sold.

In their most recent budget, the Liberals proposed an excise tax on vape products as of Oct. 1.

Now, it’s as if Health Canada is fighting the war on two fronts, Callard said.

The department has been focusing resources on youth vaping, leaving anti-smoking groups like Callard’s concerned that a tobacco strategy may be falling by the wayside.

The recent audit shows the department has been taking on projects to reduce tobacco use, but it won’t be enough to meet their own targets.

Meanwhile, advocacy groups like Rights4Vapers say smokers are being punished for making a healthier choice.

“It is probably the only addiction currently where we continue to use fear and shame to get individuals to quit,” said Maria Papaioannoy, the group’s spokesperson and a vape store owner.

The strategy does appear to be at odds with the harm-reduction approach the government has embraced when it comes to to drug use, said David Sweanor, chair of the University of Ottawa's Centre for Health Law, Policy and Ethics.

The government must table its legislative reviewof the Tobacco and Vaping Products Act this year. The discussion paper the department released touches almost exclusively on how to toughen vaping regulations, Sweanor said, though that's not what the legislation was primarily set out to do.

"Is it accomplishing what it's supposed to be accomplishing? Are there ways that you can improve it?" he said.

"Instead, what we got is a document that takes very few aspects of, primarily, their anti-vaping strategy."

The increase in youth vaping rates since the act was passed makes the review timely, said a statement from the health minister's office, adding this first review will focus entirely on vaping. The legislation needs to be reviewed every two years, and future studies will look at the act in its entirely — including provisions related to tobacco.

"Protecting the health of Canadians from exposure to, and dependence on, nicotine continues to be a priority," the statement said.

In the discussion paper, the government says the review will focus on vaping regulations because the vaping products market in Canada has changed so much in the years since the law was passed.

The review gives the opportunity to examine whether the act offers the government enough authority to address the rise in youth vaping, the paper said.

"A full assessment of whether the measures taken since the legislation was introduced in 2018 have been effective in responding to the rise in youth vaping will benefit from more time and data. Subsequent reviews will continue to monitor youth use along with other dimensions of the Act," the document reads.

Advocates for and against using vaping as a way to transition people away from harmful cigarette smoke agree, tobacco is being left out of the conversation.

"Tobacco remains the fundamental problem," said Callard. "It's tobacco that continues to kill."