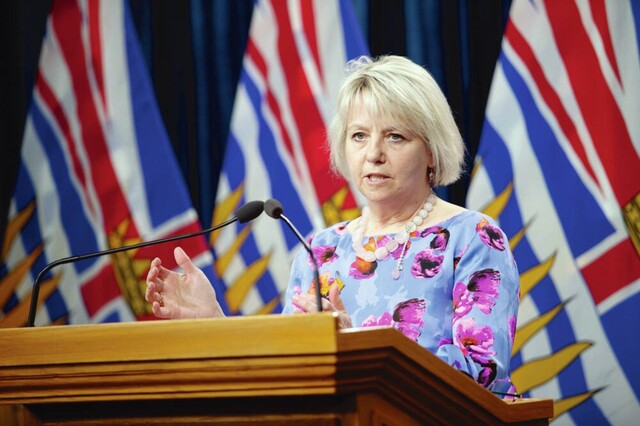 The sixth wave of COVID-19 that has spread through the province has peaked and started its decline, according to a member of the B.C. COVID-19 Modelling Group.

Sally Otto, a COVID-19 modelling expert, doesn’t use the description “sixth wave,” used throughout Canada to describe the current number of cases arising from the Omicron BA.2 sub-variant and instead refers to this period as a second Omicron wave.

“What we are seeing — which is great news — is signs that the BA.2 wave is declining,” said Otto, an evolutionary biologist and mathematical modeller at the University of British Columbia. “We’re seeing [the decline] in the wastewater, we’re also seeing it in the number of cases over age 70,” said Otto. “We’ll have a report out on Wednesday.”

The decline isn’t steep, said Otto, but there was a plateau last week and the growth rate since is negative and enough to give modellers confidence it’s on a downward trend. The levels of infection for the second Omicron wave are half that of the first Omicron wave in January and February, which was the highest infection numbers so far in the pandemic, she said.

If people have the sense that many around them are getting or have recently had COVID-19 it’s because we’re dropping from sky-high levels to almost sky-high, she said.

Otto said she wouldn’t count on a summer reprieve.

“It’s not like the flu and it still has a high enough transmission rate that you can get strong waves, even in the summer season,” said Otto.

Summer weather will undoubtedly bring people into more outdoor areas, where infection is less likely, but “I’m not sure that we can count on the summer without a wave,” said Otto.

Epidemiologists and modelling and public health experts are watching a number of Omicron sub-variants — Omicron BA.2.21 and BA.2.12.1 spreading here and in the United States, BA.5 and BA.5 driving spikes in South Africa.

Otto maintained we have a good level of immunity against any Omicron variants for now, but worried about the variants that may present themselves in a couple of months when immunity provided by third vaccinations drops off.

“That will put us back in a state where the next variant can take off,” said Otto. She said any next possible variant of concern would have to surpass Omicron and that would be a challenge because Omicron is more of an upper respiratory virus that transmits very easily.

Provincial health officer Dr. Bonnie Henry, in an update last week on the vaccination rates of health-care professionals, encouraged everyone who hasn’t had their booster to get one now and for those feeling unwell to stay home. Henry said because of high rates of vaccination, people who are getting COVID-19 now are, in most cases, not becoming severely ill.

Henry foresees B.C. going into a period of “relative ease” for the next little while, but will have to pay attention to what might happen in the fall. “We need to be prepared that we’re going to see a surge in the fall,” said Henry.

“I hope and I expect that we’ll never have to put in orders that require people to do those things like we did when we didn’t know what was going on over the last two and a half years,” said Henry, explaining people have learned about the layers of protection they need to remain safe.

Otto said she would hesitate to raise people’s hopes around an end to restrictions in case they might be necessary again in the fall.

“I’m hopeful, too,” said Otto. “It’s just that I do think that we have to be prepared and expect that there’s a possibility that we’re going to get a more transmittable uglier version. I think if you tell the public, no more restrictions, then that gets them mad when it turns around.”