A whale of a stamp 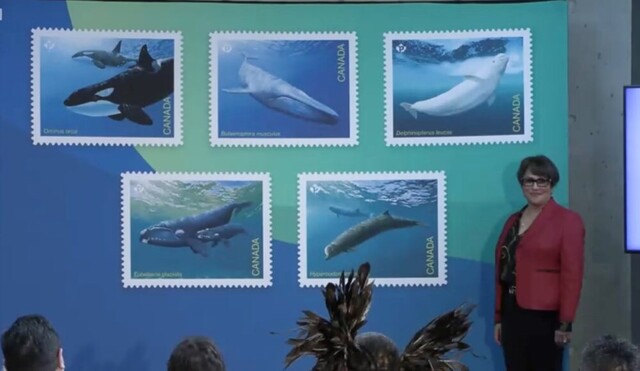 Canada Post has launched a series of stamps emblazoned with the likeness of five endangered whale species in a bid to bring attention to the multiple threats facing the cetaceans.

In a video screened at the unveiling of the stamps, Hal Whitehead — a biologist at Dalhousie University and co-chair of the Committee on the Status of Endangered Wildlife in Canada (COSEWIC) Marine Mammals Specialist Subcommittee — drove home the importance of recognizing the whales as endangered.

“Partly, because that recognition can lead to legal protection. It can also lead people and organizations to act voluntarily to stop doing things that would harm the whales,” said Whitehead. “And thirdly, it raises the awareness that we have a problem here.”

“We need to do something about it.”

Canadian waters are home to over 30 species of whales. But the combined effect of vessel strikes, entanglement in fishing gear, pollution, overfishing, climate change and underwater acoustic disturbances from human activity are leading some to struggle for survival.

Take B.C.’s southern resident killer whale population, which has languished for five decades ever since 45 members of the whale clan were killed or abducted as a spectacle for marine parks more than 50 years ago.

Today, where to begin the story of what’s killing the whales is not easy, though many scientists start with food.

Chinook salmon are already dwindling in the face of habitat destruction, overfishing, disease, and global warming effects on the sea. A suffering prey population means there are already fewer fish for whales to hunt.

Add noise from shipping traffic, which can effectively blind killer whales by interfering with their ability to echolocate prey and a whale’s prospect of getting enough fish to survive sinks.

Without enough fish, the whale begins to starve. And when a whale starves, it burns through its fat reserves — the same place where pollution like the banned industrial chemical polychlorinated biphenyls, or PCBs, accumulate.

Those toxins are mobilized when the fat burns, coursing through the whale and often dampening its immune system.

With the release of the stamps, Canada Post has signalled it wants to be part of the solution.

“We understand the scale of our environmental footprint,” said Canada Post chair Suromitra Sanatani, pointing to the postal service’s upcoming environmental plan expected to be released in the coming weeks.

With nearly 70,000 employees, Canada Post operates thousands of vehicles, many of which it’s working to transition into zero-emission models over the coming years.

The postal service, which saw a $490 million before tax loss in 2021, aims to operate on net-zero emissions by 2050 — the point where scientists say the world needs to become carbon neutral to stave off the most devastating effects of climate change.

This year alone, researchers have warned ocean heatwaves like ‘the Blob’ could threaten the carbon-sucking power of the Pacific Ocean and wipe out half of the Pacific’s wild salmon catch by 2050 — with obvious knock-on effects for the cetaceans that rely on those fish.

And in a study released Thursday in the journal Science, researchers found that if the planet continued on its current fossil fuel emissions trajectory, mass extinction events could ripple across the world’s oceans by 2300.

As sea creatures face their ecological limits, such mass die-offs would spiral into a “Great Dying” equivalent to the end-Permian extinction — a period 250 million years ago when over two-thirds of the planet’s marine species were snuffed out, found two scientists from Princeton University and the University of Washington in Seattle.

For Whitehead, hope for endangered whales in Canada also lies in taking lessons from the species humanity has already pulled back from the brink of extinction.

“There are other species which have responded to the things that we’ve done and are thriving,” he said. “We should take pride in that and use that as a template to go on.”

Or, as Hildering put it, pointing to the resurgence of humpback whales on B.C.’s coast: “There are good news stories, there really really are.”