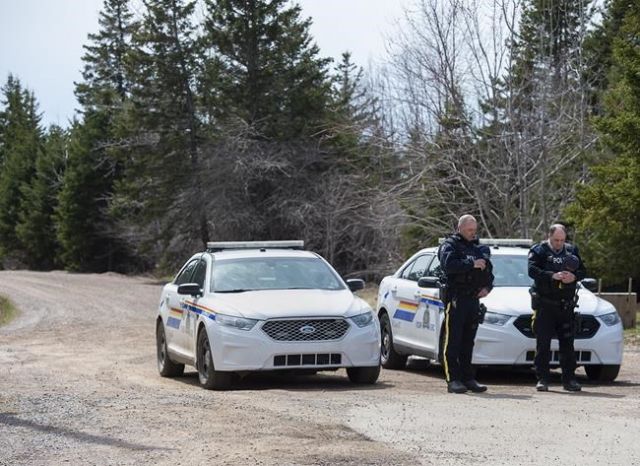 Photo: The Canadian Press
Two RCMP officers observe a moment of silence at a checkpoint on Portapique Road in Portapique, N.S.

An RCMP tactical team tasked with tracking down a mass shooter in April 2020 was dealing with the aftermath of his deadly toll in Portapique, N.S., when it was alerted hours later that he had continued his rampage in a community more than 40 kilometres away.

A new document released Monday by the inquiry investigating the tragedy that claimed 22 lives details the initial response of the heavily armed RCMP Emergency Response Team.

Cpl. Tim Mills, who headed the 13-member team, was first notified of the ongoing situation around 10:45 p.m. on April 18, 2020. The first members of his team arrived outside Portapique just under two hours later, early on April 19.

In a September 2021 interview, Mills was asked by inquiry investigators how much his tactical team knew about what was going on as it rushed to the community in central Nova Scotia from several points in the province.

Soon after its arrival, the team was about to enter Portapique when it was sent to check out several suspicious sightings involving someone with a flashlight outside homes in the community of Five Houses, across a river and nearly three kilometres away.

But they did not have operational tracking and digital mapping devices in their vehicles, while technology that was on their phones and would have allowed team members to locate one another wasn’t working. As a result, they relied on verbal radio directions from commanders to navigate their way in the pitch dark.

At one point the document notes that Mills had difficulty finding the location of the reported sightings using the instructions he was given over the radio, which also had too many members on it at the time.

He soon asked Staff Sgt. Brian Rehill, who was the risk manager at the RCMPs Operational Communications Centre in Truro, N.S., to call his cellphone to sort things out.

“It caused delays in locating addresses and … and you know, getting the lay of the land for sure,” Mills told inquiry staff, adding that night they were "definitely cursing" their inability to map and track.

Mills also voiced frustration over the team's next assignment, which was to rescue Clinton Ellison, who had been hiding in a wooded area in Portapique following the killing of his brother Corrie Ellison by the gunman hours before. Mills told inquiry investigators that Ellison would have been found sooner had there been tracking technology or a helicopter overhead to detect a body heat signature.

He said the same may have applied to the gunman’s common-law spouse Lisa Banfield, who spent the night hiding in the woods and was found by the tactical team the next morning after she sought refuge in the home of a Portapique resident.

The foundational document verifies that RCMP knew for certain from talking to Banfield at around 6:45 a.m. that gunman Gabriel Wortman was heavily armed and on the loose in a fully marked RCMP cruiser complete with a light bar.

The tactical team was finally updated at 8:20 a.m. with further information that the marked car had a call sign on its side of 28-B11.

During its nearly nine hours in the Portapique area, the tactical team also came across several victims of the gunman and verified that they were dead. Those victims included Corrie Ellison, Lisa McCully and Greg and Jamie Blair.

The team was in the midst of conducting a house-to-house evacuation of the area with a Department of Natural Resources helicopter overhead when police received a 911 call around 9:35 a.m. about a shooting in Wentworth, along with a witness report of an RCMP vehicle leaving the scene.

Const. Trent Milton, another team member, told the commission: “We knew that ... was obviously our individual. We had an active threat again, and we were pushed into the threat to try to stop it.”

The team was rushing to Wentworth when it suddenly had to divert to a home in the community of Glenholme, N.S., where the killer had reportedly been seen.

After securing that area, the tactical team was eventually sent to Debert, N.S., where victims Kristen Beaton and Heather O’Brien had been shot dead.

The pursuit eventually led the Emergency Response Team through the communities of Truro, Brookfield, Shubenacadie, Elmsdale and finally Enfield, where Wortman was shot and killed at a gas station.

Mills, who retired from the RCMP in July 2021, told commission investigators that he was satisfied with his team’s performance and believed they were confronted with a unique situation.

“Put it this way, you would never dream up a scenario like this, you know, because there’s too much going on at once,” he said.