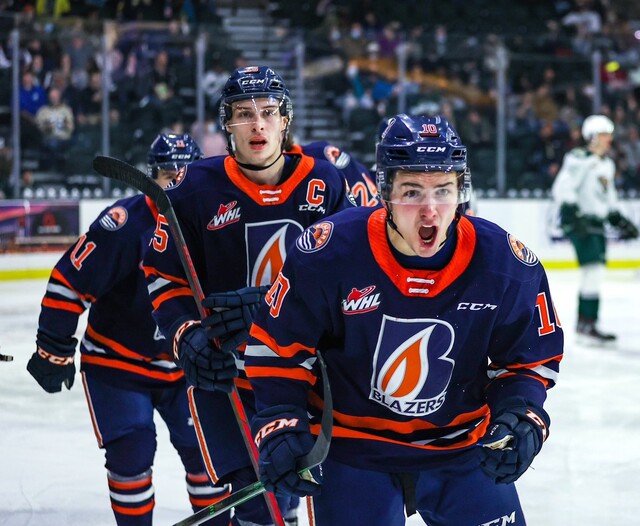 Photo: Kristen Ostrowski/Everett Silvertips
Luke Toporowski, shown here celebrating a goal earlier this season, scored twice and added an assist on Sunday in Langley as the Kamloops Blazers knocked off the Vancouver Giants with a 6-0 Game 6 win.

Daylan Kuefler and Luke Toporowski combined for six points on Sunday in Langley as the Kamloops Blazers blanked the Vancouver Giants 6-0 to punch their ticket to the WHL’s Western Conference final for the first time in nearly a decade.

Dylan Garand was perfect on 24 shots to earn the shutout in net. Vancouver goalie Jesper Vikman stopped 30 of 36 Kamloops shots in the loss.

The Blazers will now advance to the Western Conference final for the first time since 2013, when they were bested in five games by the Portland Winterhawks.

The Blue and Orange await the winner of the Winterhawks and Seattle Thunderbirds — a series Portland leads three games to two, with Game 6 slated to go Monday night in Kent, Wash.

The conference final series will begin next weekend. The Blazers will have home ice advantage, hosting games one and two on Friday and Saturday. Tickets will go on sale Monday.