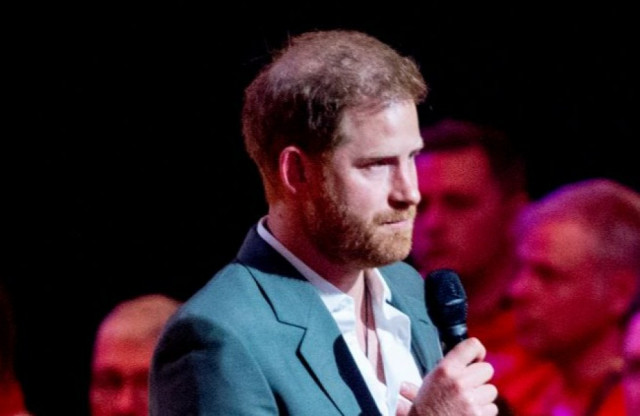 Prince Harry had told Queen Elizabeth he wasn't "keen" to appear on the Buckingham Palace balcony at Trooping the Colour.

It was announced last week that only senior working royals would join the 96-year-old monarch for her official birthday celebrations in London on 2 June, meaning the Duke and Duchess of Sussex - who stepped back from official duties two years ago - and her disgraced son Prince Andrew wouldn't be appearing.

However, the couple's biographer, Omid Scobie, insisted the news wasn't a shock to Harry and Meghan as it was a subject that had already been discussed, with the pair telling the monarch they would prefer to be part of other Platinum Jubilee celebrations during the weekend.

He wrote in a column for Yahoo!: "As is often the case, the reality is much less severe when you hear that Prince Harry had already spoken with his grandmother about the possibility of not attending Trooping the Colour long before last week's announcements.

"I’m told by a source that the Duke of Sussex had actually expressed some time ago that he and Meghan were very keen to be a part of the Jubilee engagements, including the National Service of Thanksgiving at St Paul’s Cathedral, but less so for the formal balcony moment, which was felt on both sides to be more appropriate for their lives prior to stepping back."

It was revealed on Saturday (14.05.22) that Harry and Meghan - who have Archie, three, and Lili, 11 months together - will still stay at Frogmore Cottage, their Windsor base, when they fly in for the celebrations, even though it is currently occupied by the prince's cousin, Princess Eugenie, her husband Jack Brooksbank and their 15-month-old son August.

Although Harry and Meghan no longer live in the UK, they renewed the lease - which was due to expire on 31 March - earlier this year to ensure the prince was still able to serve as one of his grandmother's four Counsellors of State because the Windsor address qualifies him as being domiciled in the UK.

A spokesman for Harry confirmed to the Daily Telegraph newspaper: "There are no planned changes to the current arrangement."

Harry and the other Counsellors of State - his father Prince Charles, brother Prince William, and uncle Prince Andrew - are able to undertake some of the queen's duties, including signing documents and attending Privy Council meetings at her request should she fall ill or be otherwise unavailable.