Giants come from behind to beat Blazers 5-2, force Game 6 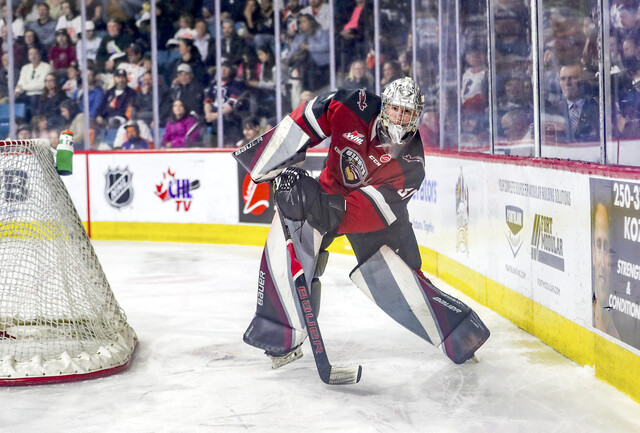 Photo: Allen Douglas/Kamloops Blazers
Vancouver Giants goalie Jesper Vikman made 35 saves on Friday at Sandman Centre as the Giants beat the Kamloops Blazers 5-2. The teams will play a Game 6 on Sunday in Langley.

A pair of goals 59 seconds apart early in the third period were enough to sink the Kamloops Blazers at Sandman Centre on Friday, dropping a 5-2 decision to the Vancouver Giants — forcing a Game 6 to be played Sunday in Langley.

Adam Hall (3), Ty Thorpe, and Zack Ostapchuk scored for Vancouver. Luke Toporowski and Matthew Seminoff were the goal scorers for the Blazers.

Goals from Toporowski and Hall had the score tied after the first period. Seminoff put the Blazers back on top at 10:43 of the second and Thorpe tied the game early in the third period.

Ostapchuk netted the game winning just 2:32 of the third — 59 seconds later. Hall and Ostapchuk tallied empty-net goals in the dying minutes to make it 5-2.

Neither team scored on the power play. The Blazers had three opportunities and the Giants had two.

Announced attendance at Sandman Centre was 4,337.

The Blazers are headed back to Langley Events Centre for Game 6 on Sunday, where they will have another chance to end the Giants’ season and advance to the WHL Western Conference final. The puck drops at 4 p.m.