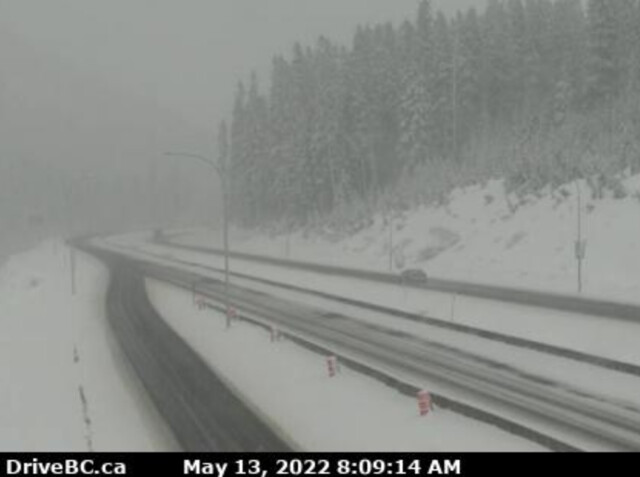 Special weather statements covered mountain passes along the Coquihalla Highway and Highway 3, as flurries added to the two to 10 centimetres dumped earlier in the week.

The weather office says 12 cold temperature records were tied or broken across the region on Thursday.

Records that have stood since 1911 were erased in Nanaimo and Port Alberni as the mercury couldn't edge past nine degrees and other low daytime temperatures were set in communities across Vancouver Island and the Sunshine Coast.

Environment Canada says Vancouver's daytime high of just 10.5 degrees on Thursday broke a 58-year-old record and the chill was accompanied by heavy rain, including downpours that washed away long-standing rainfall records in five communities from Vancouver Island to the Sunshine Coast and north to the Cariboo.

Extended forecasts from the weather office show nippy conditions will continue throughout the next week over much of B.C., as most areas remain at least several degrees below normal daytime highs.

Environment Canada's special weather statement remains in effect for the Coquihalla Highway, Hope to Merritt, and Highway 3,Hope to Princeton via Allison Pass and Paulson Summit to Kootenay Pass.

Snowfall amounts are expected to vary depending on which part of the Southern Interior you are travelling.

Some passes have received between 2 and 10 centimetres of snow, with the highest amounts near the Coquihalla Summit and Kootenay Pass.

Snow is expected to continue this morning as a trough of low pressure moves across the province. Snow levels will remain close to 1,000 metres but are expected to taper off near noon today.

Drivers are advised to prepare for winter driving conditions.