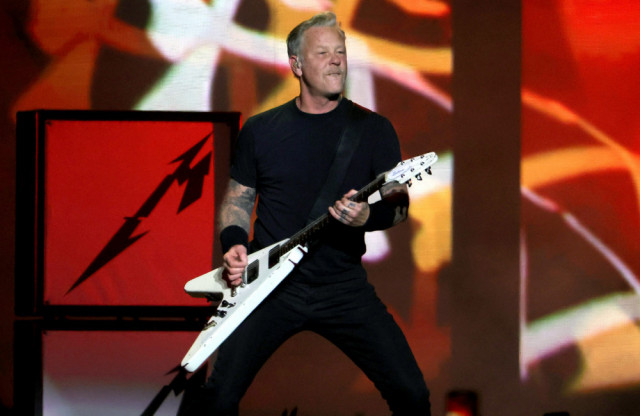 James Hetfield phoned a fan to congratulate her after she gave birth at a Metallica concert.

The 'Enter Sandman' legend called Joice M. Figueiro and her husband Jaime to wish them the best after they welcomed their baby into the world during the band's show in Brazil over the weekend.

In a clip shared by the couple on Instagram, he can be heard saying: "This is James from Metallica. Congratulations, you guys."

Joice told her followers that he stayed on the phone for seven minutes to chat to the new parents.

She added: "I have no more words."

The tattooist was heavily pregnant when she went to the 'Nothing Else Matters' rockers' gig at the Estádio Couto Pereira Stadium in Curitiba, and she started having contractions during their set.

The gig-goer, who was 39 weeks pregnant, didn't make it to the hospital and her son, who she named Luan Figueiró, arrived into the world backstage at 11.15 p.m. to the thunderous sounds of 'Enter Sandman'.

Sharing a picture of the newborn on Instagram, the new mom wrote in a translated caption: “When would I imagine that I would be at the Metallica show at 39 weeks pregnant and this boy decides to be born right there, three songs before the show ends, at Couto Pereira to the sound of ‘Enter Sandman’?”

She has since told The Washington Post: "It was a mix of emotions. Since it wasn’t planned, I was scared that the medical team wouldn’t be ready.

"But there’s also the feeling of being able to tell people that this happened because Metallica is one of the bands we love the most."

She joked Luan's name could be James Ulrich after Hetfield and the group's drummer Lars Ulrich, but didn't rule out "some homage" as his middle name.

However, she outright dismissed the idea of 'Sandman', and added: "Remember, this is the name he’ll carry throughout his whole life. He’ll get bullied with the name ‘Sandman.’ He already has enough of a story to tell.”