Caputo implores 'Freedom Convoy' protesters to 'do so peacefully' 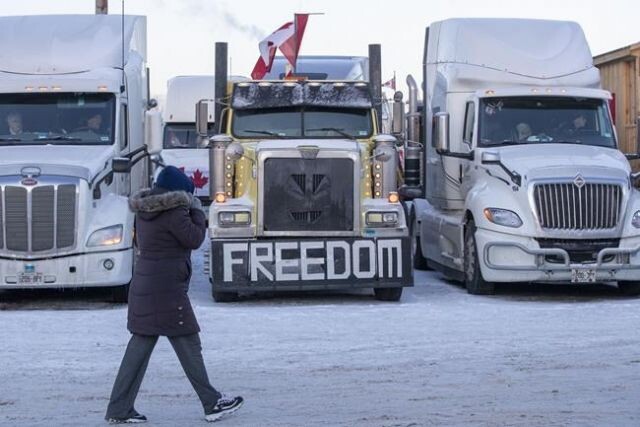 Photo: The Canadian Press
A person walks by a truck with a "Freedom" banner on it before the departure of the trucks from Kingston to Ottawa, in Kingston, Ont., on Friday, Jan. 28, 2022. THE CANADIAN PRESS/Lars Hagberg

Kamloops-Thompson-Cariboo MP Frank Caputo won’t say whether he supports a controversial protest slated to take place this weekend in Ottawa — but he says he supports the right of protesters to take to the streets, as long as they do it safely.

Castanet Kamloops asked Caputo whether he supports the “Freedom Convoy,” which is expected to draw thousands of protesters to Ottawa this weekend.

“The right to protest is central to a democracy,” he said.

“I respect this right. I always have and I always will.”

Caputo said he does not respect protesters who encourage racism, hate or violence.

“I implore all those participating in protests, whether on issues relating to COVID-19 or otherwise, to rise above negativity and do so peacefully,” he said.

The protest is against vaccine mandates. The Jan. 15 decision by Ottawa to extend the vaccine mandate at the border to commercial truck drivers poured gasoline on a fire already raging among an angry segment of Canadians. Many have been protesting COVID-19 restrictions for almost two years, but also have other grievances with the government over climate action and energy policy.

While supporters of the convoy are rallying around a cry of freedom, Trudeau has said they're ignoring the freedom of fellow Canadians to protect themselves against COVID-19, get their kids back in school, their businesses back in operation and life back to normal.

A key convoy organizer has urged people to remain peaceful, while Canada Unity, a group behind the protest, falsely believes it can work with the Governor General and Senate of Canada to bypass existing systems of governance and reverse pandemic-related restrictions and penalties.

Castanet Kamloops also asked Caputo how he feels about some of the more extreme voices allegedly involved in the protest.

“I denounce any language that is hateful, encourages violence or runs contrary to a Canadian’s individual right to protest peacefully,” he said.

Some of Caputo’s fellow Conservatives, including prominent MPs Pierre Poilievre and Andrew Scheer, the former party leader, have spoken out in support of the protesters. Scheer met with the protestors this week as they passed through Regina.

The convoy went through Kamloops on Sunday, attracting hundreds of supporters who lined Highway 1 in Valleyview.

While the federal government has imposed a vaccine mandate for federally regulated workers and at the border, almost all COVID-19 restrictions fall under provincial jurisdiction. That includes mask mandates, business and school closures, and other public and private gathering limits.

— with files from Kristen Holliday and the Canadian Press