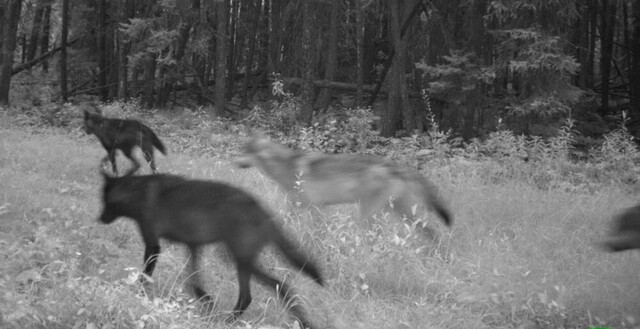 Photo: Jonah Keim
Wolves captured on a trail cam outside Fort Nelson. Despite some research hinting at non-lethal solutions to wolf-caribou encounters, the province is moving ahead with its annual cull

A 2019 report from the province found the culls "will have to take place until habitat restoration and protection overcome the legacy of habitat loss."

The province has put forward parallel plans in an attempt to bring back caribou habitat. Earlier this month, the Ministry of Forestry announced it helped fund 14 grants worth over $1.6 million to block predators from reaching caribou and transplant lichen — caribou's preferred food. The money will also be used to plant trees affected by human activity and wildfires.

"By safeguarding and restoring caribou habitat, B.C. would be doing its part in mitigating climate change while also protecting the full suite of predator-prey relationships that are being destroyed through short-term greed," he said in a written statement.

"If we're still taking habitat, no amount of killing wolves will save the caribou," she said.

The cull program comes with a financial cost. According to Pacific Wild, the province spent $2 million in 2019 and 2020 on the program, an average cost of $4,300 per wolf—ultimately leading to the deaths of 463 animals.

The conservation group is locked in a legal battle with the province over the wolf cull. The case was brought forward after B.C. amended the Wildlife Act in January 2021 to allow wolves to be trapped with a net gun from a helicopter. After they are radio-tagged, the collared wolf returns to its pack, revealing the location of the other wolves, which are then shot by helicopter-borne snipers, according to a court petition from Pacific Wild.

Pacific Wild says the case is about the government's power to allow an aircraft for hunting and the legality of permits issued by the province for the cull. The case is still before the courts.

Opposition has come from the public too.

Between September and November 2021, the province surveyed over 15,000 British Columbians asking them what they thought of the predator reduction strategy. The results, released this month, found 59 per cent of respondents opposed culling wolves as a way to protect vulnerable caribou populations.

Most respondents preferred taking action on protecting and restoring caribou habitat or better regulating industry and recreation. One in six respondents said natural resource extraction was the main cause of caribou decline.

Such views have been supported by research from the University of British Columbia, which last fall found the B.C. government is subsidizing oil and gas drilling across a swathe of critical caribou territory it promised to protect.

Other research has suggested culling could be supplemented or replaced with non-lethal solutions, like creating "wolf moguls" or hinging and downing trees across trap lines and gas and oil exploration cutlines — used by the predators to access endangered caribou. Close those corridors off, and you can reduce wolf-caribou encounters by up to 85 per cent, found researchers in a 92-square-kilometre territory outside Fort Nelson, B.C.

At the time, a spokesperson for the Ministry of Forestry criticized the study as potentially "misleading" and that the non-lethal solutions proposed do "not address the risk that is caused by increased number of wolves on the landscape and the resulting immediate threat to caribou."

"Responses to the survey were reviewed and taken into consideration; however, we must consider multiple inputs including the current science," said a Ministry of Forestry spokesperson in an email to Glacier Media.

According to its recent survey, the province found the most support for its wolf cull outside the southern and western regions of the province, where B.C.'s biggest urban centres are located.

While 98 per cent of respondents felt caribou recovery was important, those living in the largely rural central, northern and fas southeastern parts of the province were more likely to support the wolf cull.

The survey also suggested a person's job affected their views on the predator reduction program.

Respondents in resource extraction and hunters, trappers, and hunting guide outfitters were more likely to support the wolf cull.

Those who hunt and trap for a living were also more likely to say black bears and grizzlies should be added to the predator reduction plan.

Stefan Labbé is a solutions journalist. That means he covers how people are responding to problems linked to climate change — from housing to energy and everything in between. Have a story idea? Get in touch. Email [email protected]