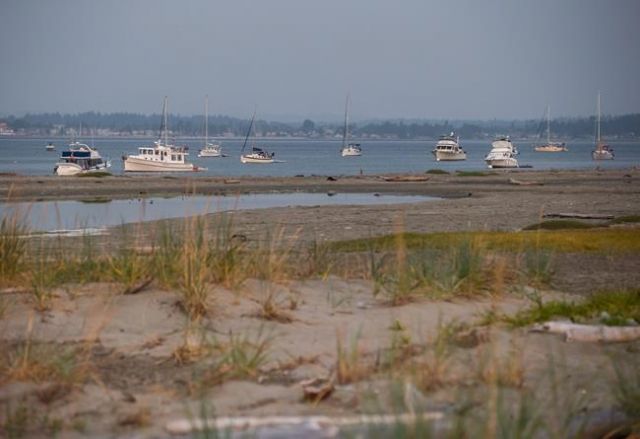 Photo: The Canadian Press
Boats are seen anchored in the waters off Sidney Spit in the Gulf Islands National Park Reserve east of Sidney, B.C., on Saturday August 5, 2017. Students and crew were safely rescued after an engine fire occurred on a passenger vessel that regularly serves as the local marine school bus for the southern Gulf Islands. THE CANADIAN PRESS/Darryl Dyck

Students and crew aboard a marine school bus have been safely rescued after an engine fire on the vessel used to ferry children to school in B.C.'s southern Gulf Islands.

A spokesman with the Joint Rescue Co-ordination Centre in Victoria says crew members on board the vessel were able to put out the fire Thursday morning.

The vessel had been taking students and staff from surrounding Gulf Islands to the high school on Salt Spring Island.

The rescue centre spokesman says there were 33 people on board, and all passengers except one crew member were safely transferred to another vessel.

The vessel has since been towed to Sidney nearby for repairs.

The rescue co-ordination centre says several vessels in the area responded to the incident, including a fast-response rescue boat launched by the BC Ferries Coastal Renaissance vessel, but that was called off before it reached the scene.