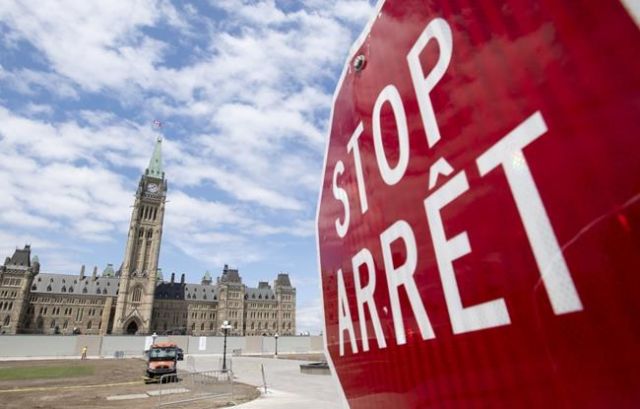 Photo: The Canadian Press
The front lawn of the Parliament buildings is shown in Ottawa, Tuesday, June 30, 2020. Parliament Hill security is preparing for up to 10,000 protesters to set up camp in downtown Ottawa this weekend pushing back against lockdowns and vaccination mandates.THE CANADIAN PRESS/Adrian Wyld

Security forces on Parliament Hill are preparing for up to 10,000 protesters to set up camp in downtown Ottawa this weekend to push back against lockdowns and vaccination mandates.

A memo the Parliamentary Protective Service sent to MPs and staff members shows the road running in front of Parliament Hill will be closed to general traffic, with the two lanes furthest from the Hill reserved for the protesters and the other two kept clear for emergency vehicles.

Accurate estimates of the number of protesters and counter-protesters expected are difficult to obtain but the document says Hill security are not expecting more than 10,000 people.

Ottawa police are warning residents to avoid travelling in the city and to expect delays.

The group billing itself as Canada Unity is demanding that the Governor General and Senate combine forces to order the federal and all provincial and territorial governments to lift any remaining COVID-19 restrictions, waive all fines and cancel "illegal" vaccine passports.

Some are more threatening in their language, with one post on the group's Facebook page saying Prime Minister Justin Trudeau should "watch out on Saturday," and commenters demanding he be assaulted, arrested, and imprisoned.

Conservative MP Pierre Poilievre warned against painting all the convoy participants as extremists just because some in the ranks may be expressing those views.

Some organizers have asked for the event to be peaceful and tried to distance the official protest from extremist elements.

In an op-ed published by Postmedia news outlets, Conservative Leader Erin O'Toole said he is upset that some want to use the convoy to incite violence.

"To these groups I say: your threats of political violence, hate and bigotry have no place in a free and democratic society," O'Toole wrote. "In fact, you risk hurting the chance for truckers to peacefully protest and have their voices heard."

The Canadian Trucking Alliance has disavowed the protest and said more than 85 per cent of truckers are vaccinated. Many truckers have also posted on social media they are continuing to do their jobs and that the convoy doesn't speak for them.

Ontario Provincial Police spokesman Bill Dickson says the police are monitoring all of the convoys but will not give any specific numbers because things keep changing.

One group left Thunder Bay, Ont. Thursday morning and was dividing in two about 100 kilometres northeast away at Nipigon. Some were headed to spend the night in Sault Ste. Marie and others in Cochrane.

Police in the Ontario cities of Belleville and Kingston were preparing for another convoy to pass through their cities Thursday, warning the public of road closures to accommodate the group.