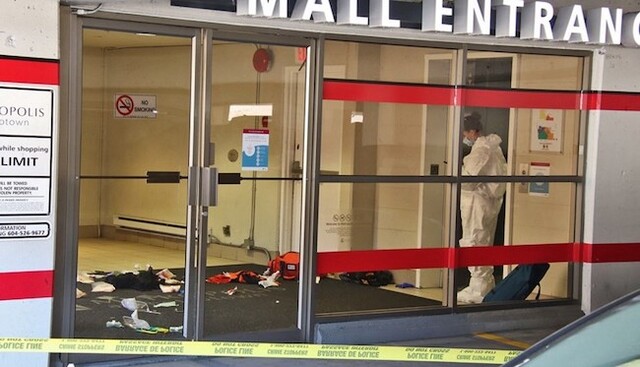 The man charged with murder in the stabbing death of a North Vancouver woman at a Burnaby mall in December also faces charges in connection to a bank robbery the following day.

Everton Downey, 31, was arrested in the Metrotown area on Dec. 19 in connection with the stabbing death of 25-year-old Melissa Blimkie at a Metrotown mall parkade that same day, according to police.

But homicide investigators didn’t have enough evidence to keep him in custody, so they had to let him go within 24 hours, according to Integrated Homicide Investigation Team spokesperson Sgt. David Lee.

“There was insufficient evidence at the time to continue holding him,” Lee said.

The day after the stabbing, at about 1:50 p.m., Burnaby RCMP got a call from a bank inside Brentwood mall, according to spokesperson Cpl. Mike Kalanj.

Bank officials said a man had walked into the place, handed a teller a note and made off with a small amount of cash, according to Kalanj.

A robbery charge was approved on Dec. 20, and a warrant was issued for Downey’s arrest, according to Kalanj.

Downey was then arrested in Richmond on Christmas Day, Kalanj said.

A month later, on Jan. 19, he was charged with second degree murder in Blimkie’s death.

Downey has been in custody since the robbery arrest. His next court appearance is scheduled for Feb. 9 in Vancouver provincial court.

Downey and Blimkie had been “in a relationship” for some time before the killing, according to IHIT, but investigators are looking for more information about the nature of that relationship, according to a news release last week.