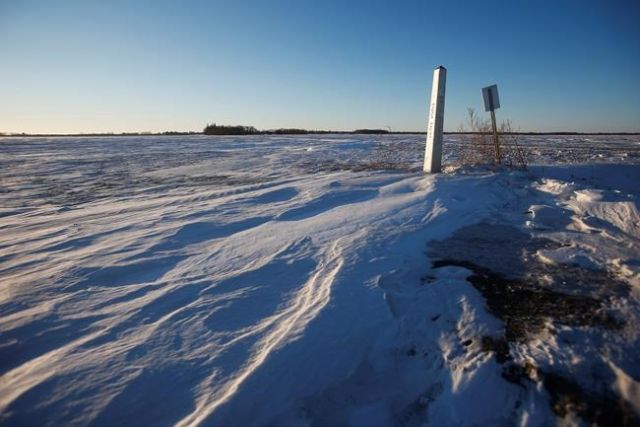 Mounties say autopsies have begun to try to identify four people who were found dead in a frigid Manitoba blizzard near the United States border.

The bodies of a man, a woman, a teen and a baby were discovered Jan. 19 in the snow near Emerson, Man. RCMP have said it’s believed they froze to death.

U.S. officials have said the four are believed to be family members who became separated from a larger group of Indian migrants trying to enter the U.S. from Canada.

Steve Shand, 47, from Florida, has been charged in the U.S. with human smuggling. He appeared in court in St. Paul, Minn., earlier this week and was released on an appearance bond.

Police in Gujarat, a state in western India, said officers there are investigating whether those who died are a missing family from that region.

A relative of that family in India told The Canadian Press that authorities there have collected DNA to try to confirm the connection.

Amritbhai Vakil said four of his relatives — a man and a woman in their 30s, a teen girl and a young boy — left for Canada more than 10 days ago from the village of Dingucha. They have not been heard from since, he said.

In India, Ashish Bhatia, director general of police in Gujarat, said investigators are looking at how the four who died travelled and who may have helped them.

Bhatia said authorities in India are aware of people travelling to Canada and other countries in an effort to get to the U.S.

U.S. authorities have said in court documents that the four deaths are thought to be linked to a larger human smuggling operation.

U.S. border agents were tipped off to a group of Indian nationals crossing the border last week after a large passenger van was pulled over. Court documents allege Shand was behind the wheel and two Indian nationals were passengers.

Around the same time, the documents say, a group was spotted by law enforcement walking in the snow toward the van. The five, also Indian nationals, told officers they had been walking for more than 11 hours in the cold and a family had become separated from the larger group overnight.

Mounties were alerted and began searching on the Canadian side of the border.