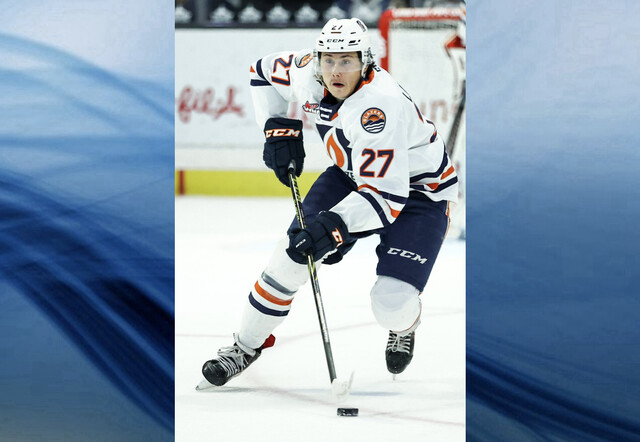 Photo: Kristen Ostrowski/Everett Silvertips
Mats Lindgren, shown here skating the puck up the ice in Everett on Nov. 27, scored the game-winner short-handed on Wednesday in a 2-1 Kamloops Blazers win over the Vancouver Giants.

Mats Lindgren scored the game-winner short-handed early in the second period at Sandman Centre on Wednesday as the Kamloops Blazers held on to beat the Vancouver Giants 2-1 — the third consecutive win for the Blue and Orange.

Luke Toporowski opened the scoring at 13:05 of the first period, a power play goal set up by Matthew Seminoff and Logan Stankoven. The goal was Toporowski’s fourth with the Blazers in three games since he was acquired from the Spokane Chiefs last week at the WHL trade deadline.

Lindgren’s short-handed marker came 57 seconds into the second period with Toporowski in the box for high sticking. He was assisted by Caedan Bankier and Ethan Brandwood.

Fabian Lysell scored the lone Vancouver goal at 12:39 of the third from Cole Shepard and Alex Cotton. That was all the offence the Giants would muster.

Those Royals will visit Sandman Centre this weekend for games on Friday and Saturday night. Puck drop both nights is 7 p.m.

The Blazers will then hit the road for a rematch with the Giants in Langley on Sunday.