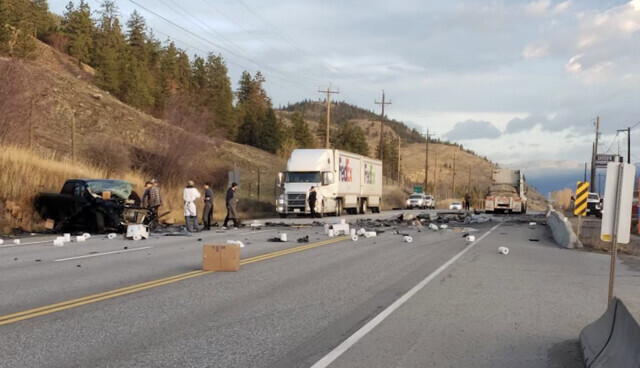 Photo: File photo
A crash near Kaleden has both lanes of Highway 97 closed in December

While the Ministry of Transportation and Infrastructure gave the green light to review options for a protected turning lane last week for the Highway 97 and Highway 3A intersection near Kaleden, their work on reviewing that stretch of roadway isn't through yet.

In a statement from MOTI, it was explained that Ministry staff will be doing a traffic analysis of Highway 97 in the Kaleden area, which is north of the 3A junction, in the summer to collect data on volumes and movements during peak traffic.

Subrina Monteith, area director for Kaleden, previously expressed that the section of road has not seen improvements in years.

Residents started a petition hoping to see changes, including the southbound fast lane changed into a left turn only lane along the stretch of highway. There are limited options to turn into Kaleden businesses heading southbound without going over a double yellow line.

"The traffic has been getting worse and worse over the years,” Heather King, the petition spokesperson previously told Castanet. “Particularly we’ve had a lot of trucks coming through that do not know how to drive this section of road. It's a narrow road. The speed is way too high and we've got people barreling along, coming north and south."

The ministry will also be review the crash history for the area during their study.

"The information collected through this analysis will be used to generate options for future safety improvements to Highway 97 in the Kaleden area. That work is expected to happen this fall," MOTI shared.

The review work will be focused on generating different options for future improvements later this year before deciding what construction may follow.