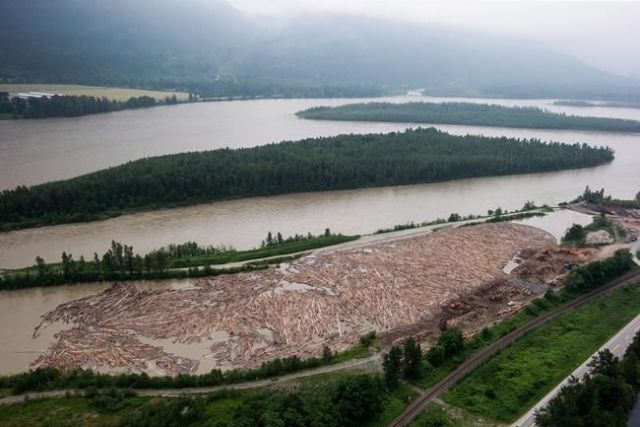 Photo: The Canadian Press
Workers use heavy equipment to clear logs from the Fraser River debris trap along the swollen Fraser River, near Agassiz, B.C., on Wednesday May 16, 2018. THE CANADIAN PRESS/Darryl Dyck

British Columbia's forest watchdog has identified four key areas where the management of forestry practices can negatively affect water and outlines potential opportunities for the province to improve regulations.

A report by the Forest Practices Board says that at least a third of the public complaints it has received since 1995 have involved the potential for forestry and range practices to affect water, including drinking water, the integrity of ecosystems, as well as public infrastructure and private property.

It says that while the board usually found forest licensees were in compliancewith provincial laws, gaps in legal requirements mean that forestry activities, including harvesting and the construction of forest service roads, can contribute to the risk of landslides, flooding and other water-related problems downstream.

The report released Wednesday says there are no legal requirements to consider the cumulative effects of forestry, or other industries and development in most B.C. watersheds.

It also says the public does not have adequate opportunities to provide input on forestry practices that affect water-related risks.

The report outlines how the province could improve forest management by making water a core value in forest planning, creating a legal requirement to manage cumulative effectsin watersheds and renewing watershed restoration efforts to reduce the impacts of historical logging.

Kevin Kriese, chair of the Forest Practices Board, says climate change can compound the effects of human activities, including forestry, on watersheds.

The creation of a new watershed security strategy along with B.C.'s climate adaptation strategy and the "modernization" of forestry legislation through changes proposed last fall provide a "rare opportunity" to improve the regulation of forest practices to better protect water, Kriese says in a statement.

The B.C. government announced Tuesday that it's developing a new strategy to protect watersheds and drinking water in response to threats posed by climate change combined with the effects of urban and industrial development.

A provincial discussion paper notes that the removal of vegetation from watersheds to allow for urban growth, or by industries such as forestry and mining, can contribute to flooding and harm drinking water sources and ecosystems.

Current forestry regulations largely focus on managing water on a site-by-site basis, and requirements to manage the cumulative effects of industry at the broader watershed level are in place for less than 10 per cent of the province, Kriese says.

Where there are no legal requirements at the watershed level, licensees have discretion to consider the cumulative effects of logging on water, and whether any risk-mitigation measures are necessary, the board's report notes.

In many parts of B.C., "multiple licensees with different risk tolerances operate on the same area of public forest land," it says. "Without clearly established objectives, a decision made by one licensee to mitigate risk could be undone by another."

The report says enacting new requirements for licensees to manage cumulative effects at the watershed level could function as a "bridge" to eventually completing forest landscape plans under a new system proposed by the province last fall.

The system developed in partnership with First Nations, local communities and others would prioritize forest health, replacing existing plans developed largely by the forest industry, Forests Minister Katrine Conroy said at the time.