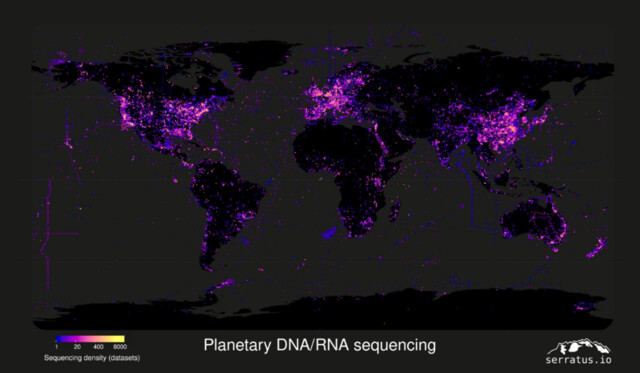 Nine new coronaviruses have been discovered by a research team led by a former University of British Columbia (UBC) postdoctoral fellow in medical genetics.

Dr. Artem Babaian and his team at the Serratus Project made the discovery after re-analyzing all publicly available RNA sequencing data worldwide.

Working with the Cloud innovation Centre, a collaboration with UBC and Amazon Web Services, the program created a "supercomputer" to analyze 20 million gigabytes of publicly available gene sequence data. Using 5.7 million biological samples from around the world, they searched for a specific gene that indicated the presence of an RNA virus.

Samples used included everything from ice-core to animal dung.

"We're entering a new era of understanding the genetic and spatial diversity of viruses in nature and how a wide variety of animals interface with these viruses," says Babaian.

During the project, searchers found 132,000 RNA viruses, of which only 15,000 were previously known. They also discovered nine new species of coronaviruses.

"The hope is we're not caught off guard if something like SARS-CoV-2—the novel coronavirus that causes COVID-19— emerges again," he says.

Babaian believes these viruses can be recognized more easily, and their natural reservoirs can be found faster.

"The real goal is these infections are recognized so early that they never become pandemics," he says.

Serratus Project completed the research in 11 days at an innovation cost of $24,000.

Babaian says the Cloud Innovation Centre allowed the team to conduct the research efficiently, and it would have taken well over a year and hundreds of thousands of dollars to do the research.

"If a patient presents with a fever of unknown origin, once that blood is sequenced, you can now connect that unknown virus in the human to a way bigger database of existing viruses. If a patient, for example, presents with a viral infection of unknown origin in St. Louis, you can now search through the database in about two minutes and connect that virus to, say, a camel in sub-Saharan Africa sampled in 2012," he says.

The 32-year-old was conducting genetic research with BC Cancer but switched gears when the COVID-19 pandemic hit.

The Cloud Innovation Centre launched just before the pandemic in January 2020 and allows students, staff and faculty access to cloud technology to advance projects related to community, health and well-being.