No weapons for Ukraine 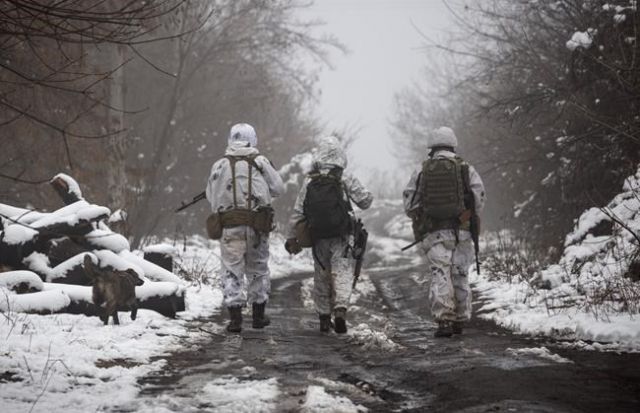 Canada is extending and expanding its mission to train Ukrainian soldiers but it is not, so far, prepared to help arm them with lethal weapons as Ukraine has requested.

Prime Minister Justin Trudeau is not, however, categorically ruling out sending weapons in future.

"We continue to look for ways to be helpful to the Ukrainian people as they stand up for their rights to live in a democracy, to choose the course of their country, to defend their territorial integrity. This is something we are unequivocal on," Trudeau told a news conference Wednesday at the end of a three-day cabinet retreat.

"We will continue to monitor the situation closely and stand by our Ukrainian friends as we look to give them the support that they need."

He said he's also authorized the Canadian Armed Forces to deploy 60 additional personnel to join the 200 troops already on the ground, with further capacity to increase that number up to 400.

The price tag includes the provision of non-lethal equipment — such as scopes and body armour — intelligence-sharing and support to combat cyberattacks, Trudeau said.

He stressed that "this is not a combat mission" but is intended to help Ukraine defend itself against Russian aggression.

"This is the way that Canada can best help and it's an extension of our firm belief that standing up for Ukraine means being there so they can speak and defend themselves, while at the same time continuing to pursue a diplomatic solution at all levels," he said.

Russia has positioned about 100,000 troops across Ukraine's border along with tanks and other heavy artillery, raising fears across Europe and the NATO military alliance of an invasion, something Russia has denied.

And he said Defence Minister Anita Anand will travel to Latvia and Ukraine to visit with Canada's troops there in the coming days.

Asked how he expects to deter Russian aggression without arming Ukraine's military, Trudeau argued the united front among NATO allies and western democracies against Russia's conduct "is a significant deterrence in itself."

"We have been clear on the steep economic sanctions and measures that will be brought in if Russia invades Ukraine to any further degree."

The options could see Canada joining its NATO allies in imposing export controls on Russia to deprive it of sensitive technology related to artificial intelligence, which is being actively considered by the United States.

Last week, Trudeau announced Canada was giving Ukraine a $120-million loan aimed at bolstering the country's economy in the face of the ongoing threats it faces from Russia, but said the government was considering further actions that would be discussed by his cabinet.

But the government has been under growing pressure to do more.

Ukrainian Canadians, and the Ukrainian government in Kyiv, are asking Canada to provide weapons to the Ukraine military, impose further sanctions on Russia and extend Canada's military training mission of its forces beyond its expiry date at the end of March.

Russia has positioned about 100,000 troops across Ukraine's borders along with tanks and other heavy artillery, raising fears across Europe and the NATO military alliance of an invasion, something Russia has denied.

Senior White House officials on Tuesday discussed some of the options for countering any further Russian incursions into Ukraine, following the Kremlin's annexation of the Crimean Peninsula in 2014 and its fomenting of Russian-backed separatist rebels in the Ukraine's eastern region, which has claimed thousands of lives.

U.S. officials say a fresh round of export controls that would cut off Russian President Vladimir Putin's access to some much-coveted technology is being considered by Washington and its allies.

"In addition to financial sanctions, which have immediate and visible effect on the day they're implemented, we're also prepared to impose novel export controls that would deal Putin a weak strategic hand over the medium term," said one senior U.S. official, speaking on the condition of anonymity as per ground rules of the media briefing.

The official said export controls are effective because they leverage "the global dominance of U.S.-origin software, technology and tooling" that extend into artificial intelligence, defence, aerospace and other sectors.

"The export control options we're considering alongside our allies and partners would hit Putin's strategic ambitions to industrialize his economy quite hard," said the U.S. official. "And it would impair areas that are of importance to him."

On Tuesday, three Conservative MPs called on the Liberal government to redirect weapons to Ukraine that were originally intended for Kurdish Peshmerga fighters in northern Iraq.

The Trudeau cabinet's closed-door meeting in Ottawa is unfolding against a much larger backdrop of high-stakes diplomacy in Paris as the top advisers from Russia, France, Germany and Ukraine — the so-called "Normandy format" — to ratchet down tensions and find a solution.

Ottawa followed its allies on another key move on Tuesday by ordering the children and family members of its embassy staff in Ukraine to leave the country.

"The safety and security of Canadians, our personnel and their families at our missions abroad is our top priority," Global Affairs Canada said.

On Monday, decision by Global Affairs updated its travel advisory warning against non-essential travel to Ukraine, which has been in effect since last week. The advisory now suggests Canadians who are in Ukraine consider leaving.