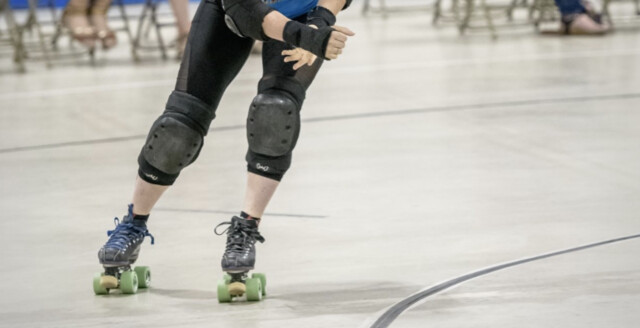 The golden age of roller rinks is back in Penticton.

On Saturday night, the South Okanagan Roller Derby Association hosted a pop-up roller skating event at the Penticton Trade and Convention Centre that was at full capacity, harkening back to the days when roller rinks were once a staple of social life.

The event attracted almost 100 people, enough to prove the concept had legs. SORDA quickly made plans for another pop-up event in February.

"It was crazy. And it's still crazy. We're just a very small handful of volunteers putting this all together," said SORDA member Cassandra Capone, also known by her derby name "Ram Rod."

"The amount of requests and messages and emails and everything we've been getting has been awesome, also overwhelming, but in a good way."

Attendees embraced the throwback vibe, sporting sequins and grooving to tunes from the 80s. Admission was $15, with all proceeds going to SORDA. The venue was sponsored by Penticton LockWorks.

Another pop-up is planned for Feb. 26, due to overwhelming demand.

"This one was pretty casual. But for the next one, we're gonna get a DJ, and maybe play some of those roller skate games," Capone said.

"All of those fun things we used to do at the roller rink."

Capacity is limited due to COVID-19 restrictions, so SORDA says the best way to be sure to attend the next pop-up is keep an eye on them on Facebook for announcements, and register early.

They plan to have a third pop-up rink in March, then may take a break when the roller derby season gets underway.

Everything they raise from the events goes to their training.

Follow SORDA and the Penticton Pistoleras Roller Derby Team on social media here, and find out more about how to get involved by emailing [email protected]