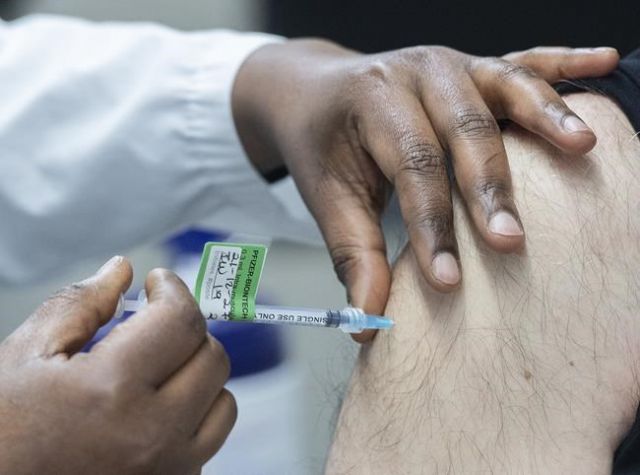 A new survey suggests a widening gap between the pandemic views of people who have opted to get a COVID-19 vaccine booster and those who are holding steady with only two shots.

A web panel survey carried out by Leger for the Association for Canadian Studies shows 67 per cent of people with a booster dose who responded are afraid of contracting COVID-19, compared to just 52 per cent of those with two doses.

"We're seeing what I call a 'booster hesitancy,' as opposed to a vaccine hesitancy, and it's shaping some of their attitudes. Their level of concern about COVID is a bit different from the boosted. The degree to which they're concerned about the vaccination is a bit different," said Jack Jedwab, president of the Association for Canadian Studies.

For instance, 82 per cent of boosted respondents said they supported vaccine mandates at shopping malls and retail outlets, compared to only 57.8 per cent of people with two doses.

And 79 per cent of boosted people responded that they strongly support vaccine mandates in other non-essential public places like bars, restaurants and gyms.

That's compared to only 48 per cent of people with two vaccine doses.

There appears to be a growing split between the "boosted and the two-timers," Jedwab said.

"The issue takes on a bit more complexity than it (had) previously," he said.

People who received a booster shot were also more likely to respond that governments should not lift COVID-19 restrictions, at 85 per cent, compared to 71.5 per cent of people with two doses.

Generally, unvaccinated people responded at the other far end of the spectrum, with 65 per cent responding that COVID-19 restrictions should be lifted, and 94 per cent expressing opposition to vaccine mandates in shopping centres.

"They're in a completely different place," said Jedwab.

The results were gathered from 1,547 Canadians over the age of 18 between Jan. 7 and Jan. 9, and cannot be assigned a margin of error because the web survey did not randomly sample the population.

The number of COVID-19 cases have hit record highs in January thanks to the Omicron variant of the virus, which is said to be relatively more mild compared to past variants but can infect even vaccinated people.

Governments and public health officials have urged Canadians to get a third mRNA vaccine to protect them against the most serious effects of the virus, which has still sent people to the hospital in large numbers and threatened to overrun Canadian health systems.

The booster can also stave off the effects of waning immunity from the first two shots, which appear to offer less protection against contracting the virus over time.

About 41 per cent of Canadians over the age of 18 have opted for a COVID-19 booster as of Jan. 15, according to the Public Health Agency of Canada, but the survey suggests 73 per cent of respondents intend to get three shots.

At the same time, less than 10 per cent of adults have eschewed vaccination against the virus altogether.

Those reasons are very different from the ones given my people who have opted to remain completely unvaccinated, who since the beginning of the vaccine rollout least year have typically said they're more afraid of vaccine side-effects than the virus itself, Jedwab said.

In this latest poll, the unvaccinated were six times more worried about vaccine side-effects than getting COVID-19.

"That's not what people who are double-vaccinated are saying and it's not any meaningful degree," he said.

Only eight per cent of double-vaxxed people reported being concerned about the side-effects of the booster.