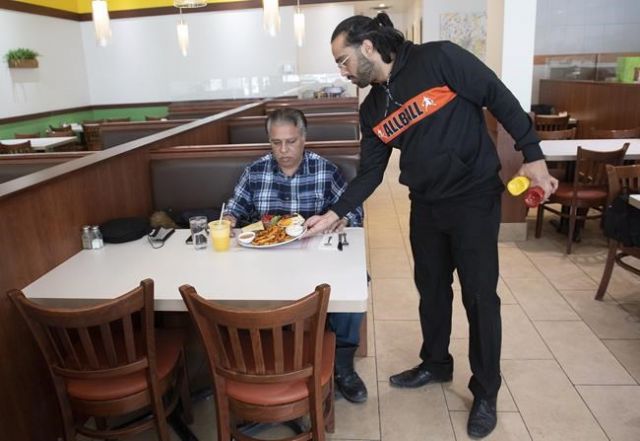 Photo: The Canadian Press
Humza Chaudhry, co-owner of Baba & Zazu, serves a customer at his restaurant in Montreal in defiance of lockdown rules, Tuesday, Jan. 25, 2022, as the COVID-19 pandemic continues in Canada. THE CANADIAN PRESS/Graham Hughes

Quebec will soon begin lifting some of the COVID-19 restrictions that have been in place since December, beginning with easing private gathering limits and allowing restaurant dining rooms to reopen, Premier François Legault announced Tuesday.

"I told you last week that we were seeing the light at the end of the tunnel," Legault told a news conference in Montreal. "I think we can say today that we are out of the tunnel."

He cautioned, however, that the province's health system is "in rough shape" and it will take time to build the hospital capacity the province needs.

As of Monday, restaurants in Quebec will be able to welcome diners, with capacity limited to 50 per cent and no more than four people, or two different households, at a table.

The premier said restrictions on private gatherings will also be loosened, with gatherings of up to four people, or two family bubbles, permitted. Also beginning Monday, school and youth sports will be allowed to resume.

Legault said the province had no choice but to open gradually given the fragile state of its hospitals. "We are all aware that a lot of Quebecers are fed up; they're fed up with the restrictions," Legault said. "It’s been 22 months."

Beginning Feb. 7, entertainment and sports venues will be allowed to reopen at 50 per cent capacity, with attendance capped at 500 people. Legault said a further phase of reopening, which would include gyms and spas, would be announced when the situation in hospitals improves.

Despite a drop in hospitalizations in recent days, Health Minister Christian Dubé said the health system can still only carry out between 40 and 45 per cent of scheduled surgeries, on average. He did not provide a date for when surgeons would begin to catch up on the backlog, but he promised it would be "the minute that we have the necessary personnel."

Dubé said the number of health workers missing from the system had stabilized at about 12,000, allowing the province to begin reopening some emergency rooms that had cut hours or services due to the pandemic.

Quebec reported 85 more deaths linked to COVID-19 and a slight drop in hospitalizations on Tuesday.

Legault had been facing pressure to ease restrictions from sports organizations, the cultural sector and restaurants, and some business owners had threatened to reopen regardless of the rules. Gyms, bars and entertainment venues have been closed since December, as have restaurant dining rooms. Private gatherings have also been limited to members of the same household.

Legault said that in the future, he wants to avoid the "yo-yo" of opening and closing, but he was evasive when asked to rule out the possibility of future lockdowns. Instead, he focused on a long-term plan to overhaul the health system to increase capacity to better respond to future surges and allow Quebecers to better "live with the virus."

Martin Vézina, a spokesman for a group representing Quebec restaurants, said he was happy that dining rooms can reopen, even though the capacity limits will make it difficult for owners to turn a profit without continued government aid.

But he said reopening would allow restaurants to hire back some of their employees and would give them enough time to prepare for the lucrative Valentine's Day holiday.

At least one Montreal-area restaurant owner, however, was no longer willing to wait for the official green light.

Humza Chaudhry, co-owner of breakfast and lunch restaurant Baba & Zazu in the Mount Royal neighbourhood, said he reopened his dining room a few days ago and no longer worries about the consequences.

"Enough is enough. We’re done with it," he said Tuesday in a phone interview. "Everything is open, if we don’t open we’ll go underwater."

Chaudhry said his dining room is open to full capacity. He said that even if an official reopening is coming, he needed time to train his kitchen and floor staff and prepare them physically and mentally for a return to work.

The response from customers, he said, has been positive. "They feel like they’re getting out of prison."

Meanwhile, Quebec reported a 21-patient drop in hospitalizations linked to COVID-19. The Health Department said 3,278 patients were in hospital after 272 people were admitted in the previous 24 hours and 293 were checked out. The number of people in intensive care remained unchanged at 263.

Quebec also reported 2,977 new cases of COVID-19, but officials say the number isn't representative of the situation because testing is limited to high-priority groups.