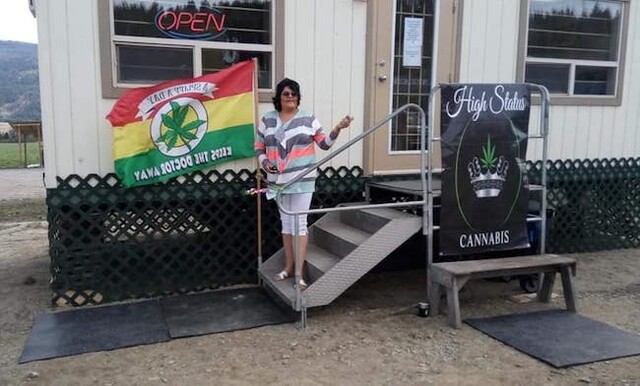 The owner of a First Nations-run cannabis shop on Splatsin land says she's closing the doors due to too many non-Indigenous retailers moving in.

River Johnson of High Status cannabis says the local market is oversaturated and she can't compete.

Johnson announced the closure on the shop's Facebook page.

"Due to the saturation of the market here, we have decided it's not In our best interest to keep moving in this direction," she wrote.

"We are and have been in a state of white knuckling it for some time now. We can no longer keep our doors open and will no longer be able to employ Splatsin people," Johnson added.

High Status was the first 100% Indigenous Splatsin-owned dispensary to open on the North Okanagan reserve, in August 2019.

Hers is just one of two Splatsin-owned cannabis shops out of a dozen that have sprouted up on reserve.

She says the system "is a free for all," especially for non-Indigenous operators who "want to escape provincial and federal laws."

"It's truly a disgrace," she said.

Johnson says Splatsin has no bylaws regulating cannabis sales, unlike the Okanagan and Tk'emlups bands.

She says she has "kept quiet in trust and hopes of change by Splatsin leadership," but she sees no hope of change in the near future.

Johnson said it is colonialism all over again ... "only this time, it's pot."

She had seen the business opportunity as "an opportunity to pull ourselves out of poverty, to be sovereign ... I'm so frustrated."

She said she feels non-Indigenous operators are taking advantage of opportunities that should belong to the Splatsin people.

"Does this sound or look like we are empowering our Splatsin peoples? I dont think so. I believe we are still allocating a movement of conquering our own people at home."

She says there was no mention of cannabis regulation during the recent Splatsin elections, but that she hopes it comes up in the future. She ran for council herself to bring about change.

She says with a population of just 2,965, a dozen pot shops is way too many. "You don't have a dozen Lululemon stores in Kelowna," she added.

The issue is not just of concern on reserve.

Sarah Ballantyne of Spiritleaf in Vernon alleges the lack of regulation leaves an opening for organized crime to enter the retail market.

Ballantyne, spokesperson for the Okanagan Cannabis Collective of licensed retailers, has long complained about unlicensed operators and the uneven playing field that is neither regulated nor policed.