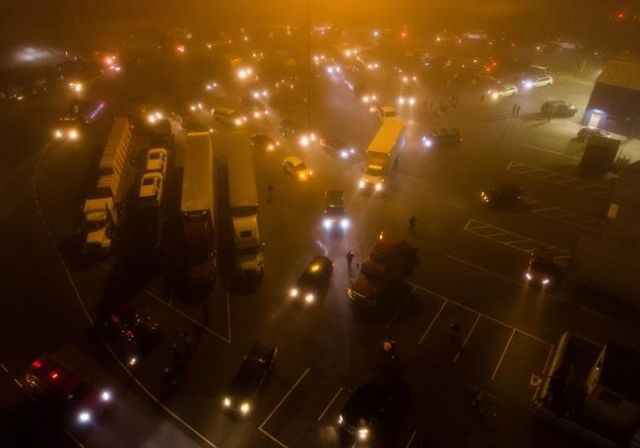 A trucker convoy has left the Regina area and is expected to stop in Winnipeg today before making a final stop in Ottawa later this week.

The Regina Police Service estimates about 1,200 trucks went through the city last night.

They converged at a truck stop in Balgonie, Sask., after coming from Saskatoon and other western provinces.

The convoy was greeted last night by supporters — including Conservative members of Parliament Andrew Scheer and Warren Steinley — and again this morning by others before it left for Winnipeg.

A Calgary woman, who would only give her name as Delores, says the convoy is more than a protest against COVID-19 vaccine mandates for truckers.

She says it's also about an "us versus them" mentality that she believes applies to the vaccinated and unvaccinated.

Several vehicles waved American and upside down Canadian flags, while one pickup truck had a Maverick Party sign — although those involved did not all associate themselves with Western separatism.

One man, who declined to provide his name because he works for an oil and gas company and didn't want to get reprimanded, says he joined the convoy in Hinton, Alta., with his 12-year-old son.

He says he's supporting the convoy because he's tired of seeing his children affected by COVID-19 measures, including restrictions on sports.