Supporters flock to cause 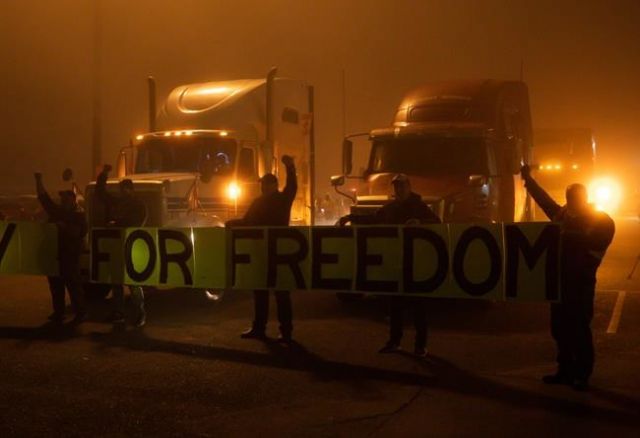 Photo: The Canadian Press
Truckers and supporters raise their fists and hold a banner before a cross-country convoy destined for Ottawa to protest a federal vaccine mandate for truckers departed in Delta, B.C.

A group of truckers is garnering millions in fundraising dollars as it drives across the country to protest vaccine mandates, despite the vast majority of big-riggers having been jabbed.

Setting off from Vancouver on Sunday, the group had raised $3.5 million from some 46,000 donors by Monday afternoon in support of truck drivers poised to converge on Ottawa this weekend, according to the campaign's GoFundMe page.

The makeshift fleet aims to demonstrate against the federal requirement that essential workers — truckers included — be vaccinated if they want to avoid a 14-day quarantine after crossing the border from the United States.

Harwil Farms Mobile Feeds, whose dozen drivers deliver feed to farms and livestock to slaughterhouses in southern Ontario, donated $5,000 to the convoy, putting it among the top contributors.

Owner Wendy Metcalfe says she is against vaccine mandates and skeptical of COVID-19 vaccines, and that the convoy will draw attention to what she considers government encroachment on fundamental freedoms.

Prime Minister Justin Trudeau says the mandate marks a key tool for keeping Canada's economy on track and that the Conservatives are "fearmongering" about empty store shelves, while the Tories pressure Ottawa to lift a mandate they deem a risk to supply chains and the economy.

Reese Evans, general manager of Evans Trucking, said 14 of his 36 drivers who typically haul lumber across the Alberta-Montana border are unvaccinated and now largely out of commission. His outfit donated $5,000 to the campaign.

"We as a company don't believe that the government — that it's their right to tell people what they should or shouldn't be doing with their bodies," he said. "That should always be an autonomous decision for each individual person."

Evans said the new rule, in conjunction with the U.S. decision to bar unvaccinated Canadian truckers from entering the country as of last Saturday — Canada has the same policy toward U.S. drivers — would only exacerbate supply shortages and price hikes.

Public opinion polls since August have shown a vast majority of Canadians back vaccine mandates for essential workers.

On Saturday, the Canadian Trucking Alliance condemned protests on roads and highways, and said earlier that at least 85 per cent of drivers are fully vaccinated. But Evans said planned demonstrations near border crossing points across the country this weekend are safe and legal.

“Nobody is stopping on the highway with their vehicles and crossing the roads,” he said.

Up to 26,000 of the 160,000 drivers who make regular trips across the Canada-U.S. border would likely be sidelined as a result of the vaccine mandate in both countries, according to the Canadian Trucking Alliance and the American Trucking Associations.