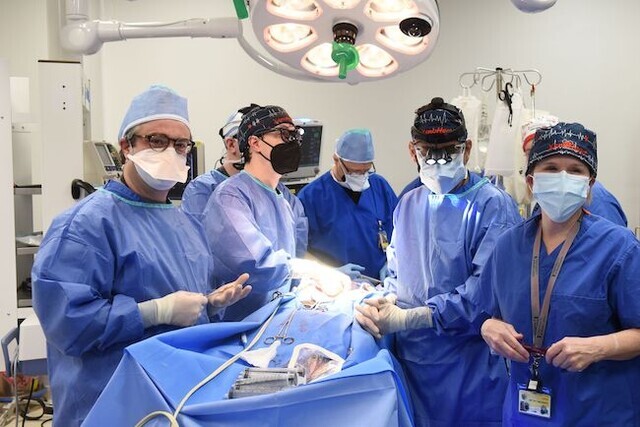 In an unprecedented surgery, a 57-year-old American with serious heart disease had a heart transplant with a genetically-modified pig’s heart on Jan. 7.

The surgery was a first, performed by a team from the University of Maryland School of Medicine. It’s among the first to illustrate the feasibility of a pig-to-human heart transplant, a procedure made possible by new gene-editing tools. Science has given us xenotransplantation through gene editing.

Despite the successful operation, the patient is still hooked to a heart-lung bypass machine, which is keeping him alive. For a transplant, however, this is not out of the ordinary.

Agricultural production has supported our agri-food sector since the beginning of time, essentially to feed humans. It has also developed new vocations over the years, for example, with the energy industry.

Now, some researchers are contemplating animal production to help the health-care sector, which is in dire need of organs. At any given time, 4,000 to 5,000 people are waiting for organs in Canada. And every year, 200 to 250 people in Canada die while waiting for an organ transplant.

For the patient in Maryland, xenotransplantation was his only option to stay alive.

Xenotransplantation can save live—but some people will surely ask questions about the ethical and moral aspects of breeding animals to produce organs to save human lives.

The university obtained emergency clearance from the U.S. Food and Drug Administration under its compassionate use program a week before the operation. A few days later, the donor pig, raised in a hyper-sanitized environment, was slaughtered to extract its heart.

Science can be amazing. But the concept of a gene-edited pig, designed to produce a compatible organ for a human, will make some people uneasy. The science is real, and a debate is warranted.

Xenotransplantation has been discussed for years, but this is the first successful operation involving modifying a pig’s genetics to increase the chances of compatibility. For years, chimpanzee kidneys have been transplanted into humans, even a baboon heart into a baby, but the survival period has never exceeded nine months.

After a series of failures, the scientific community temporarily abandoned xenotransplantation—until pigs were considered.

Pork production lends itself better to xenotransplantation as it’s possible to obtain an organ of adequate size within six months. Several patients have received valves and other parts from pigs with positive results, so the concept isn’t new. But transplanting a pig’s entire organ is unprecedented.

Before we judge or condemn the practice, we must consider the egalitarian issue of transplants.

A hidden aspect of transplants is related to racialized groups. A black, Asian or Indigenous person is less likely to get an organ donation than a white person. Chronic diseases, genetics and blood history make it more difficult for them to find a donor. A person from these groups has between 50 and 70 per cent less chance of getting a donation when on the waiting list.

Xenotransplantation supported by gene editing offers humanity a tailor-made organ donation system. But this brings its share of bioethical questions, especially when it comes to the ethical treatment of animals.

There’s also always the risk of transmitting porcine viruses to humans. And in light of the COVID-19 pandemic we’ve all been living through for nearly two years, that’s no small consideration.

This is a discussion worth having. Revivicor could have at least given the pig a symbolic name like British researchers did with Dolly, the famous cloned sheep. After all, the pig is the real hero here.