Veteran lives in his car 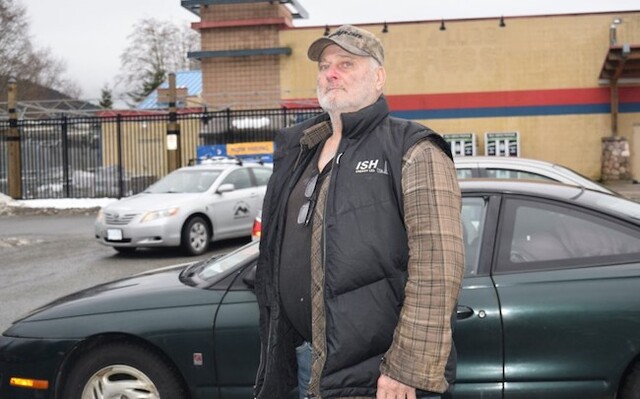 He is 81 years old, served his country for 11 years, two months and eight days in the Canadian Forces as a combat engineer. Five of those years he was deployed to Germany.

He lost his cabin in the Squamish Valley during the past year, when the property switched hands.

Larson is a proud man who has lived a quiet life in Squamish for 22 years.

Some folks might remember him from the late 1990s, early 2000s when he drove a one-ton truck and would haul hay.

His former neighbours Jeremiah and Randi White have launched a GoFundMe campaign to raise $20,000 for a van they will have converted for Larson to live in.

The "Please help 81-year-old veteran living in his car," campaign has already reached close to half of that.

Larson doesn't want or need much. Just a place away from people.

A shelter environment wouldn't work for him, Larson said. Too many people.

He's slept in the driver's seat of his packed car over the winter.

His car is loaded with food, a sleeping bag, books and, on Friday, a newly drawn picture by the Whites' daughters.

He spends his days reading books, a dog-eared James Patterson mystery at the moment.

"He's one of my favourite authors," Larson said.

Larson said he met Jeremiah when the fellow veteran bought a wheelbarrow off of him.

White said as a former military veteran himself (he was infantry) he understands why Larson wants to be out on his own and not in a shelter.

"Orville and I do share a general distaste for civilization. That is why we both ended up out in the valley," White said, with a laugh.

Asked what he thinks of the campaign to get him a liveable van, Larson said the plan surprised and shocked him.