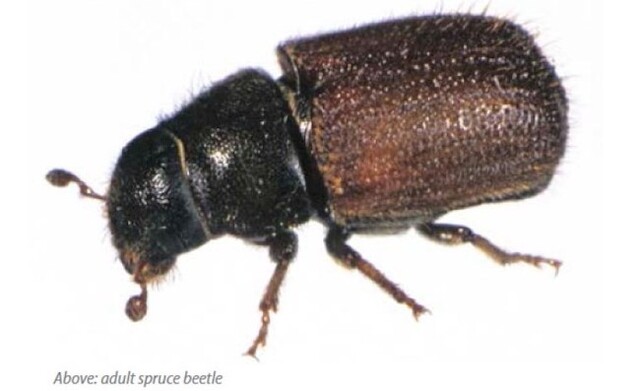 Between Jan. 3 and 8 temperatures hit a low of -32 C in the Central Interior and stayed below -22 C for those six days.

Could that have affected beetles that have infested trees in and around Prince George?

It didn’t even faze the spruce beetle, whose numbers have increased since 2014 from a rating of endemic (just a part of the forest) to an outbreak rating with no end in sight.

“At -32, those beetles were most likely perfectly fine, they don’t really start to freeze until the temperature is a bit closer to -35,” regional forest entomologist Philip Batista says. “And really what’s needed is -40, that’s where you get zero survival.”

There are areas that would reach those temperatures, but also what’s needed is very little snowpack, as deep snow acts as an insulator, Batista adds.

Only then would the spruce beetle’s built-in antifreeze proteins not be able to save it from the frigid temperatures.

In 2013, 7,653 hectares of forest in B.C. were affected by spruce beetle infestation. By 2019, there was more than 503,799 hectares impacted, including in the Omineca Region (Prince George, Fort St. James, Mackenzie, and Vanderhoof) that saw more than 354,000 hectares infested with the biggest hit centralized in the Prince George Natural Resource District as 259,629 hectares are affected.

Since 2014, a total of 1.3 million hectares have been impacted in the province.

The spruce beetle prefers to attack old growth trees and this latest infestation took place when a wind throw event - where trees are completely uprooted - took place north of Prince George and then again north of Mackenzie.

“It seems lately that every time we get a downturn the spruce beetle just pops right back up,” Batista said. “So it would be really great if we got those really cold temperatures even for a week because that’s what’s needed for it to have a significant effect.”

Spruce beetle populations in the area have reached outbreak numbers and there is still the pine beetle that’s out there and the Douglas fir beetle is experiencing a little bit of an outbreak right now as well, Batista noted.

Last year’s data isn’t available yet and that's the tell when it comes to seeing how much more devastation has been done by beetles.

“So we’re kind of holding our breath, hoping there’s some good new in terms of how these beetles are acting,” Batista said.

As part of continued operations the government continues to work with licensees targeting pest management harvesting to remove infested, dead and dying trees, he added.

“The idea is to harvest those trees before they lose economic value,” Batista explained. “That’s always going to be in place where harvesting is allowed.”