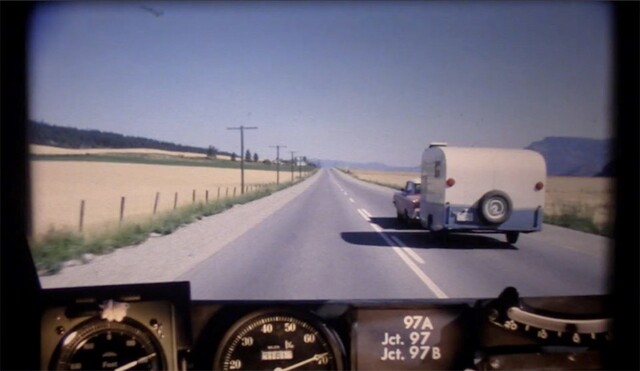 Photo: BC Transportation
A frame from a 1966 video that takes you on a trip through the North OkanaganBC Ministry of Transportation & Infrastructure

The BC Ministry of Transportation & Infrastructure has just published a video shot in 1966, as part of their BC Road Trip Time Machine series. The digitized archival videos take people through British Columbia in the 1960s by way of time lapse photography, and this latest release takes us through the North Okanagan.

According to the ministry, the videos were originally shot "as a tool to capture road condition information across the province and give our engineers the ability to study a particular stretch of road without having to travel into the field."

They would rig a camera onto the dash of a car, shooting a still image "every 80 feet or so," then put the frames together into a single film.

First you'll go through the town of Vernon then wind past Swan Lake, Historic O'Keefe Ranch and the very edge of Armstrong.

You'll then go through the Okanagan Indian Band reservation at the north end of Okanagan Lake, past the Falkland Stampede grounds, and through the teeny tiny community of Westwold.

Next you'll get a glimpse of the now-defunct sawmill at the head of Monte Lake (complete with an old school beehive burner), then wind your way down the hill and through the town of Monte Creek, towards Kamloops and very near to the spot where Bill Miner and his gang of outlaws robbed a train in 1906. Instead of heading to Kamloops you'll take the fork to the right, and make your way through Chase, then along Little Shuswap and Shuswap Lakes, through Sorrento, and, finally, Salmon Arm.

But you won't stop there! No, you've still got Grindrod and Enderby to visit.

You could have driven from Vernon the other way and got to Enderby in a few minutes but the scenic route is well worth it.

Many of the farming communities on the route go by in a blip as they're so small, and while much of the scenery has changed since the year the video was shot there's surprisingly a lot that's remained almost exactly the same.

Oh, and watch for the Easter egg that is a semi truck laying on its side with a sandwich board next to it.