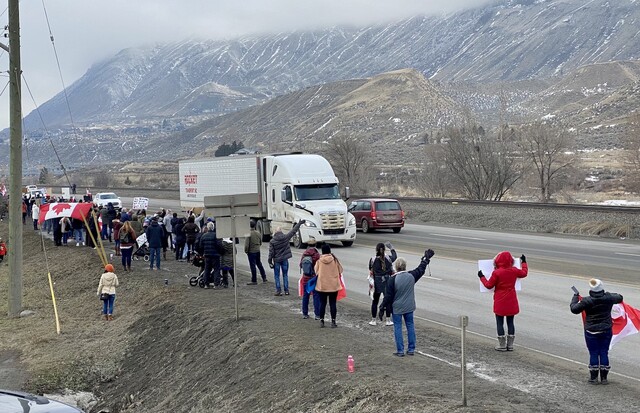 Those greeting the "Freedom Convoy" held signs saying "Take back freedom" and "No mandate, no vax, no passport."

A GoFundMe page set up by Maverick Party board member Tamara Lich has raised more than $2.5 million as of Sunday. Lich says the funds will be used to pay for fuel for the truckers, along with food and lodging.

Truck drivers from across Canada are heading to Ottawa to protest the recent COVID-19 requirement for truckers crossing into Canada from the U.S., and a part of the convoy is expected to pass through Kamloops Sunday.

The federal government's new mandate that all truckers crossing into Canada from the United States be vaccinated for COVID-19 took effect Jan. 15. As a result, a large contingent of truckers and supporters are taking part in the “Freedom Convoy 2022,” in protest of the new measure and of COVID-19 measures across the board. A large protest in Ottawa is scheduled for Jan. 29.

One contingent of the convoy left Delta early Sunday morning, heading east, and they're scheduled to stop near Kamloops at noon. The convoy will stop at the Petro Pass at 175 Kokanee Way east of the city, before departing at 1 p.m.

One of the organizers of the convoy, Tamara Lich, has setup a GoFundMe page that has raised more than $2 million, from more than 27,000 donors. Lich is a board member with the separatist Maverick Party, based out of Alberta, which was formerly Wexit Canada.

Lich says the money will go to reimbursing participating truckers for fuel costs to get to Ottawa, along with food and lodging. She says any leftover funds will be donated to a “credible veterans organization.”

“We are a peaceful country that has helped protect nations across the globe from tyrannical governments who oppressed their people, and now it seems it is happening here,” Lich writes on the GoFundMe page.

“We are taking our fight to the doorsteps of our Federal Government and demanding that they cease all mandates against its people.”

Lich says the donations are "a small price to pay for our freedoms."

"So where does this love for truckers come from?" asks James Menzies of Today's Trucking.

The Canadian Trucking Alliance, a federation of provincial trucking associations, issued a statement Saturday condemning any protests on roads and highways.

“CTA believes such actions – especially those that interfere with public safety – are not how disagreements with government policies should be expressed,” the Alliance said.

“Members of the trucking industry who want to publicly express displeasure over government policies can choose to hold an organized, lawful event on Parliament Hill or contact their local MP. What is not acceptable is disrupting the motoring public on highways and commerce at the border."

The CTA says the “vast majority” of Canadian truckers are already vaccinated for COVID-19.