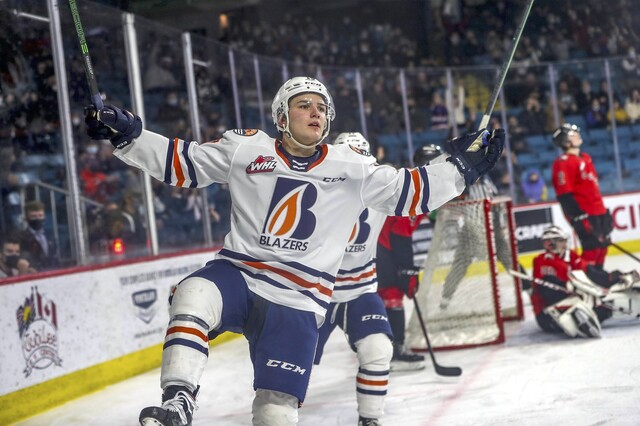 Newcomer Luke Toporowski scored the game winner early in the third period at Sandman Centre on Saturday as the Kamloops Blazers came from behind to earn a 3-2 win over the Prince George Cougars.

Matthew Seminoff, Connor Levis and Toporowski were the goal scorers for the Blazers. Ethan Samson and Cayden Glover scored for Prince George.

The Blazers led 1-0 after the first period, but the Cougars scored twice in the second to take a 2-1 lead. Levis tied the game 4:12 into the third period and Toporowski tallied the winner 38 seconds later.

Saturday’s win capped off a big weekend for Toporowski, an overage forward acquired on Monday at the WHL trade deadline in a deal with the Spokane Chiefs. He scored twice and added an assist Friday in Prince George — a game the Blazers won 5-1.

Fellow newcomer Drew Englot, a 19-year-old forward acquired Monday in a trade with the Regina Pats, assisted on Seminoff's first-period goal on Saturday. He had two assists in P.G. on Friday night.

The loss drops the Cougars to 17-19-1-1 on the campaign, four points back of the Rockets in third place in the division.

Saturday’s game was the first of four in a row at home for the Blazers, who will welcome the Vancouver Giants (16-17-2-0) on Wednesday before the Victoria Royals (12-19-4-0) arrive for games on Friday and Saturday next weekend.