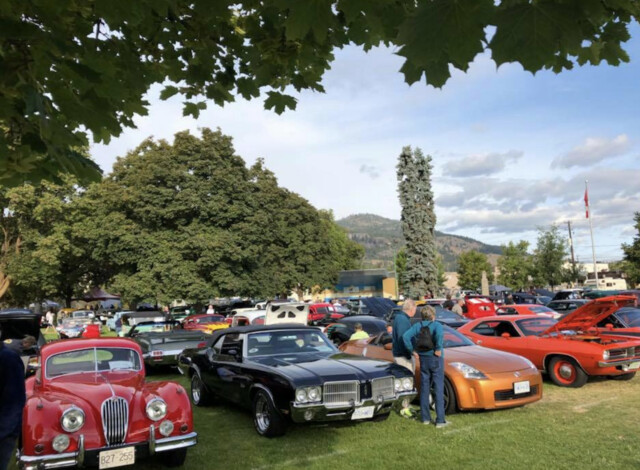 The Spring Fling Car Show would be similar to the group’s annual Show & Shine car show held in September, hosting a large-scale event in Memorial Park and surrounding roads on the Saturday, May 21.

This May long weekend car show would coincide with the annual Peachland World of Wheels show on Sunday, which each year brings in more than 550 cars, trucks, motorcycles and antique boats and attracts over 10,000 people to Peachland, according to the district staff report.

bringing many people into town, staff express concerns to protect the health of park trees, grass and infrastructure.

“Upon review of this application for a new event, staff are concerned to permit vehicles in

Memorial Park for another event this year. As this event is in the spring season and the subsurface material will be saturated and much softer at the start of growing season, the turf and irrigation system will be much more prone to long-term damage to the root system and potential for permanent rutting,” the report reads.

Currently the District is in the process of working on updating the Parks Regulation Bylaw and recognize that vehicles in parks can cause damage to grass, turf, tree roots, trees and park infrastructure.

Previously the September Show & Shine event was granted approval by council to allow for the event cars to be displayed in the park, with certain restrictions on avoiding higher-risk areas in the park for tree root protection.

The event was cancelled due to the pandemic.

Suggestions from staff include either working with the organizers to find and avoid those high risk areas again in the park or to consider other hard surface locations to host this event in Summerland such as the roads downtown surrounding the park and larger parking lots.

Council will discuss the event proposal on Monday.