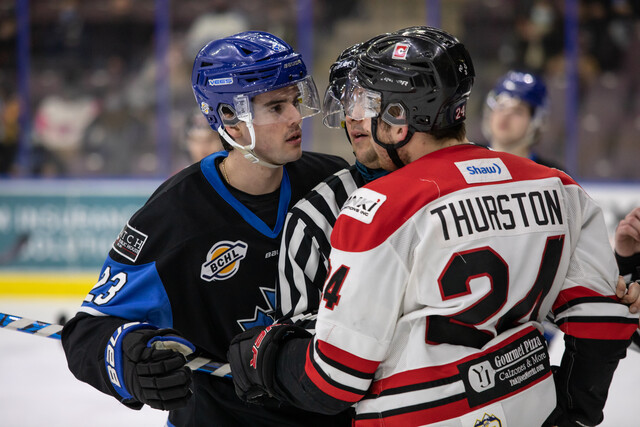 There was no stopping the Penticton Vees's scoring on Friday night, using a four-point effort from Brett Moravec, including a hat-trick, and the ninth career BC Hockey League shutout from Kaeden Lane to earn an 11-0 victory over the Merritt Centennials at the South Okanagan Events Centre.

The Vees got the scoring going early and often in the with seven goals in the first period. Casey McDonald was first to strike for Penticton, snapping a shot past the blocker side of Centennials goaltender Jackson Baker at the 2:21 mark.

Moravec earned the first of his three goals of the night at the 4:16 mark of the first period, taking a pass from Ethan Mann and beating Baker through the legs fo a 2-0 lead.

Only 37 seconds later, Adam Eisele got his first goal as a Vee at the 4:53 mark, taking the puck to the edge of the left circle and zipping a shot over the glove side of Baker to make it a 3-0 game.

Merritt switched up their goaltender as Peyton Trzaska came on in relief.

During a power play for the Vees, the team jumped ahead with a goal that took a bit of time to review but ended up counting for the Vees. Moravec batted the puck out of the air and had that attempt stopped by Trzaska before McDonald got the puck over the goal line before having it come out of the net quickly and was ruled a goal at the 7:53 mark of the period for a 4-0 lead.

Luc Wilson extended the Vees lead again with a power play marker of his own at the 16:37 mark of the period, sliding the puck past the glove side of the right-handed catching Trzaska.

Under a minute later, Stefano Bottini increased the Penticton lead to 6-0 by driving hard to the net and redirecting a pass from Thomas Pichette past the glove side of Trzaska.

Concluding a seven-goal first period was Wilson, who grabbed his second goal of the period in the left face-off circle and shooting the puck over the left shoulder of the Centennials netminder.

Midway into the second period, Josh Nadeau got in on the scoring after a pass from Ryan Hopkins in the left face-off circle from the cross-ice feed landed into an open goal to push Penticton ahead by an 8-0 margin.

Another good moment for the Vees came in the way of Mason Poolman registering his first career BCHL goal at the 15:03 mark, with a shot from the left point carrying through the glove side of Trzaska for a nine goal lead.

Moravec completed his hat trick with a pair of goals in the game’s final period, scoring at the 3:02 mark of the frame to push the Vees ahead by a 10-0 score before earning his third goal of the game on a breakaway at the 15:49 mark of the period for an 11-0 final score.

Lane made his first appearance since December 11th and made 13 saves for his fourth shutout of the season. Baker turned aside four of the seven shots in 4:53 of action for his third loss of the season while Peyton Trzaska made 48 saves on 56 shots in relief.

The Vees make their way to Washington State for the first of a three-game set against the Wenatchee Wild beginning on Thursday night. Puck drop is slated for 6 p.m. at the Town Toyota Center.